– DSS urged Nigerians to disregard the news, describing it as “misinformation and fake”

The Department of the State Security (DSS) said its operatives did not make any attempt to arrest a popular Yoruba activist, Chief Sunday “Igboho” Adeyemo.

In a statement on Friday, February 26, the intelligence agency through its public relations officer, Peter Afunanya, described the reported attempted arrest as misinformation.

Legit.ng earlier reported that the vehicles of the self-styled Yoruba youth leader on Friday, February 26, were reportedly stopped by operatives of the Nigeria Police Force (NPF) and the DSS along the Lagos-Ibadan expressway. 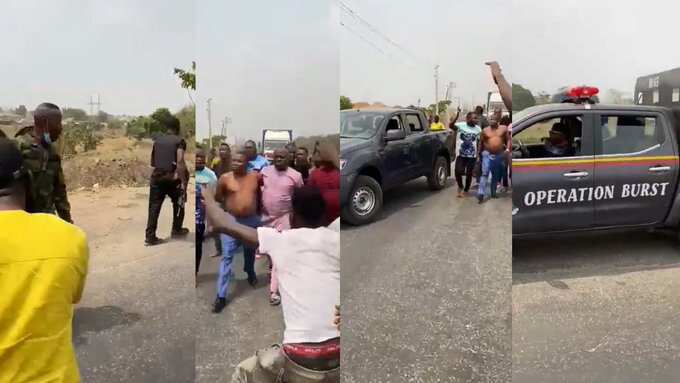 According to former minister of aviation, Femi Fani-Kayode, the self-styled activist was said to be on “his way to see Baba Ayo Adebanjo”, a Yoruba elder and one of the Afenifere leaders in Lagos.

The attempted and foiled arrest has been generating a whirlpool of reactions on social media, with Nigerians telling the federal government to face the problem of insecurity.

Afunanya, in a reaction, said there was no plan to arrest the Yoruba activist, urging Nigerians to dismiss the news of the arrest, The Nation reports.

“The said news is misinforming and should be taken as fake and therefore be disregarded.

“The Department of State Services wishes to refute the news that it attempted to arrest one Sunday Igboho, today, at Ibadan, Oyo State,” the statement read.

Speaking on Channels TV’s Sunday Politics on Sunday, February 14, the former governor said the issue of ethnic crisis in Oyo should be addressed using a roundtable discussion.

Fayose noted that Igboho cannot be overlooked “in the circumstances we have found ourselves”, adding that the only way is to make peace with all the aggrieved sides.