– However, Salah failed to find the back of the net against Crystal palace, with Kane scoring his 23rd against Leicester

– Kane also picked the Playmaker of the year award after bagging 14 assists in the Premier League, two ahead of Bruno Fernandes and Kevin de Bruyne

The Englishman was on target against Leicester City on Sunday, May 23, on the final day of the season, with his goal sending him past Salah on the goalscorers charts. 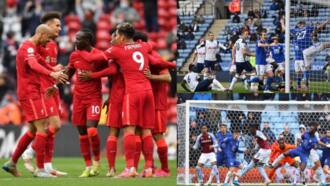 Jamie Vardy, who won the award last season scored the tie’s opener from the penalty spot, only for Kane to equalise just before halftime with a brilliant volley.

Vardy went on to add his second of the match to have the Foxes dreaming of a Champions League place, but Kasper Schmeichel’s goalkeeping blunder saw Spurs spring a stunning comeback to win 4-2.

Kane was integral in the victory as he set up substitute Gareth Bale to hand their side a crucial win.

The Englishman’s goal ultimately helped him pick the Golden Boot award, with his nearest competitor, Salah, who had been tied with the Spurs talisman going into the final day failing to find the back of the net against Crystal Palace.

According to statistics, Kane’s strike and assist took his tally of goal involvements in the Premier League to 37 this season, with the incredible feat also helping him win the Playmaker of the Season Award. The forward bagged 14 assists during the just-concluded campaign, two ahead of Man United’s Bruno Fernandes and Man City’s Kevin de Bruyne both of who had 12.

The Spurs hitman is now the first player in 22 years to win both awards in the same campaign.

Meanwhile, Legit.ng had earlier reported that Chelsea had to rely on Tottenham Hotspur for them to qualify for next season’s Champions League on the last day of the 2020/21 season.

The Blues needed at least a win against Aston Villa in their last fixture of the campaign or at least for Leicester City to falter against Spurs.

With both Man City and Man United earning the top two slots, Chelsea, Leicester, and Liverpool were left to fight it out for a place in the top four.