EXCLUSIVE: I Don’t Have Any Comment on Femi Fani-Kayode, Says Basiru ▷ Nigeria news

EXCLUSIVE: I Don’t Have Any Comment on Femi Fani-Kayode, Says Basiru ▷ Nigeria news


FCT, Abuja – Senator Surajudeen Ajibola Basiru has said he does not have any comment on the defection of Chief Femi Fani-Kayode to the ruling All Progressives Congress (APC) even though the former minister of aviation is from his home state of Osun.

Basiru, the spokesman of the Nigerian Senate was accosted by a Legit.ng reporter at an event in Abuja to speak on Fani-Kayode’s defection.

The senator flared up immediately saying:

Asked if Osun state APC will welcome the former minister into the party, Senator Ajibola said:

“I am not APC Osun state. Go and meet the party chairman. I said I don’t have any comments. I am here for very serious business.”

Ajibola, a former Attorney General and commissioner for justice in Osun, also served as commissioner in the ministry of regional integration and special duties from August 2010 – November 2014.

Recall that the southwest unit of the Peoples Democratic Party (PDP) lambasted Fani-Kayode over his claim that he had wrongly criticised President Muhammadu Buhari in the past. 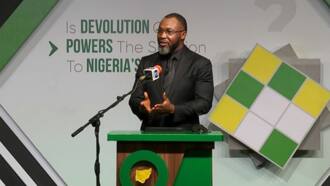 The southwest PDP, through its publicity secretary, Sanya Atofarati, said nothing had changed about Buhari, adding that the socio-political and economic situations in the country were getting worse by the day under his watch.

The PDP, therefore, challenged Fani-Kayode to come out clean, describing him as a “political liability” and “political beggar.”

Fani-Kayode had earlier reacted angrily to insinuations that he defected to the APC for financial reasons.

Speaking on a television station hours after his defection, the former minister said he is considerably wealthy as opposed to what people think about him.

He also queried why such comments did not spring up when other chieftains of the PDP moved to the APC.