Many Nigerians are reportedly battling high blood pressure as a result of the activities of unscrupulous online loan sharks taking advantage of the economic situation of the country.

These criminal loan sharks that parade google playstore have become experts in blackmail and blatant invasion of peoples privacy. They have been accused of employing different types of mannerless and uncultured characters as workers.

The federal government have also insisted that most of them are illegally operating in Nigeria. And in efforts to regulate them, the FG through an Inter-Agency Joint Regulatory & Enforcement Task Force of FCCPC, NITDA, ICPC raided some of the loan sharks offices in Lagos state.

The government has also released some pictures showing the faces of some of the agents of these illegal loan sharks who have always been operating clandestinely in the country. 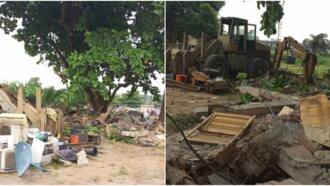 Here are some of their faces as released by FCCPC.

Meanwhile, hundred of Nigerians are excited with the latest development.

“Thanks such for standing for us at this crucial time. I would have been a dead soul if not for God and people around me due to the defamatory messages sent to my contacts all in the name of loan that I collected. I was involved in a fatal accident which resulted in surgery. The second day of the surgery I began to receive calls and messages from my contacts telling me what cashsea and cashlion has done. Why using customer’s data against them?”

“They should also look into those that are not registered on playstore, Some will come to your Dm begging you to download via the link they sent to you. Those people are very very wicked. God bless you for the good work.”

“Thank you sir. Nigerians have gone through unimaginable hardships in the hands of these criminals who hide to perpetuate their evil activities. God bless you sir.”

“Loans app caused my friend to kill herself last year. They defamed her as a thief, criminal, scammer and sent it to is contacts. Depression and discrimination lead to her death.”

“Loan sharks kill, ruin families, take people out of jobs with their malicious ways of recovering their money. Before them, we were living our normal lives we we shall survive without them please scrape them from our system.”