Lionel Messi has been a toast of football fans all over the world and every one of them have a special way of honouring him, The Sun.

A die-hard fan recently did the unthinkable as he moulded the Barcelona superstar out of clay receiving one of his numerous accolades.

The supporter crafted the six-time Ballon d’Or winner in a Barca outfit holding a trophy as the Argentine was full of smiles. 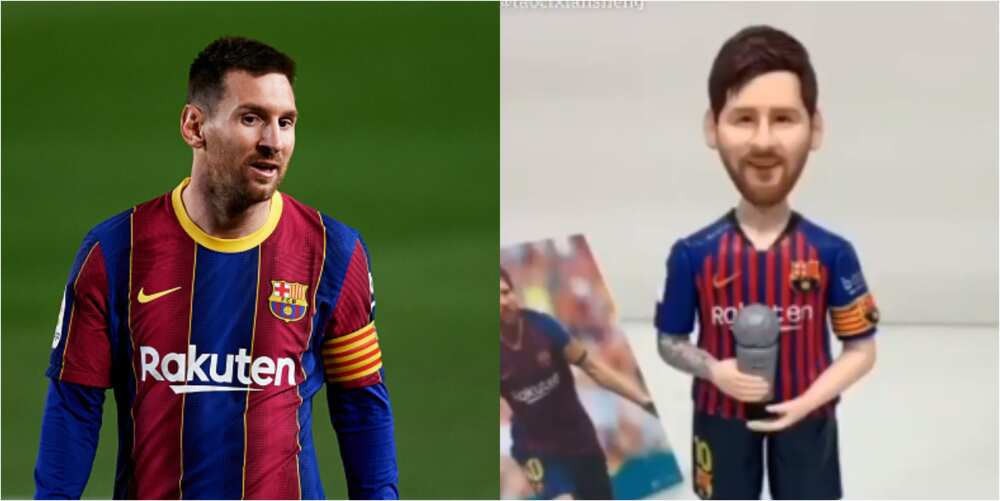 On the other hand, Messi is gradually getting his side to their best as they recently overturned a first-leg 2-0 deficit in the Copa del Rey semi-finals to win by 3-0 at the Camp Nou.

Ronald Koeman’s men are now back in the title race as Atletico’s lead in La Liga has been cut short to three points.

Messi is the league’s top scorer this season with 19 goals and Barcelona will need to do the impossible to cancel out their Champions League last 16 4-1 first-leg defeat to PSG at Parc des Princes.

Joan Laporta is the club’s new president after winning over 54 per cent of votes during the election and the Spaniard has promised that his second spell would see Barca keep Messi for a longer period. After dumping Sevilla out of Copa Del Rey, Barcelona send crucial message to them on social media

Meanwhile, Legit.ng had earlier reported that Joan Laporta who recently got elected as the new Barcelona president has stated emphatically that he is expected to convince the captain of the club Lionel Messi to stay at Camp Nou.

This latest development will be a cheering news for all Barcelona fans considering how they have been expecting the Argentina international to sign new deal.

Laporta on Sunday, March 7, defeated two other opponents in an election to become new Barcelona president and was in joyous momentum after the announcement.