– Minister of Communications, Isa Pantami, said he has spoken to central bank of Nigeria over block of USSD by banks

– The Faceoff is as a result of commissio cut by the telecoms company, having decided to.pay some banks low USSD fee

The Federal Government has vade into the Faceoff between MTN Nigeria and the deposit money bank. The telco and the financial institutions are at loggerheads over commission on Unstructured Supplementary Service Data (USSD) usage.

Legit.ng had earlier reported that MTN had reduced commission given to lenders from 3.5% to 2.5%. The decision was contested by the banks, but the telco refused to yield. 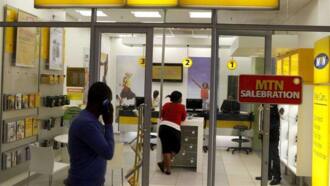 The disagreement led to MTN subscribers not being able to access USSD of Guaranty Trust Bank, Access Bank and other financial services. The faceoff between both sectors have now drawn the attention of the government.

Commenting on the issue, the Minister of Comnunications and Digital Economy, Isa Pantami, said he has spoken to the regulators of respective sectors, Central Bank of Nigeria and the Nigerian Communications Commission.

Pantami said the disagreement will be rresolve in order for services to be restored:

“On the fallout between @MTNNG and some banks on USSD services today, I engaged with both regulators, the Governor of @cenbank and EVC @NgComCommission.

“We have reached an advance stage of resolving the issues, for the services to be restored to our citizens. Many thanks.” the minister said in a statement posted on his Twitter page.

Meanwhile, Legit.ng had earlier reported that Atedo Peterside, the founder of Stanbic IBTC, told the Federal government to use the money budgeted to repair the port Harcourt refinery, to build hospitals.

Peterside said the $1.5 billion is enough to situate a twelve tandard hospital in every geopolitical region in Nigeria.