Former Super Eagles captain John Obi Mikel who won the African Cup of Nations title with the national team has met one of the world’s richest men Alhaji Aliko Dangote.

Aliko Dangote is a known billionaire everywhere in African and many part in the world considering the money he has been able to make through his investments.

Mikel Obi on the other hand is also one of the richest African players who made lots of money while playing for Chelsea in the Premier League and also in the Chinese Super League. 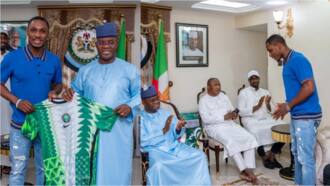 He is currently in Nigeria after finishing the 2020/21 season with English club Stoke City where he performed wonderfully well for the side.

According to the photo Mikel Obi shared on his page, the Nigerian football legend thanked Alhaji Aliko Dangote for the chance to share joint commitment together.

“Exceptional gratitude to Alhaji Aliko Dangote GCON! it was a remarkable outreach and a unique honour that you hosted my team and I. We had the opportunity to share our joint commitment to bettering lives and supporting dreams of the Nigerian Youth through sports. Nagode Alhaji.”

Earlier, Legit.ng had reported how former Super Eagles captain Mikel Obi seems to be having a swell time with politicians as he was sighted with business tycoon Senator Ifeanyi Ubah. 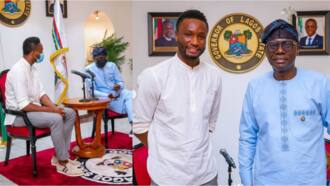 Ubah who currently represents Anambra south in the Nigerian Senate is vying for the governorship seat of his state in an election billed to hold in November this year.

And just days after he was sighted with Governor Yahaya Bello of Kogi State, Stoke City star Mikel was pictured hanging out with Senator Ubah.

The oil magnate earlier declared his intention to run for the Anambra governorship position m during a ‘Thank you’ rally hosted at the DCC Field in Nnewi.

He had thanked the people of Nnewi North for throwing their weights of support for him to become a Senator in 2019 and formally informed them that he would run for governor in the November 2021 election.