Former Super Eagles coach Sunday Oliseh has confirmed his readiness to return to coaching three years after the Nigerian legend has last managed a professional football League side.

Sunday Oliseh remains one of the greatest footballers to have come out of Nigeria considering his styles of play years back in the midfield.

Dutch side Fortuna Sittard is the last club Sunday Oliseh managed and the 46-year-old has been without a team since then with speculation that he might not even return to coaching. 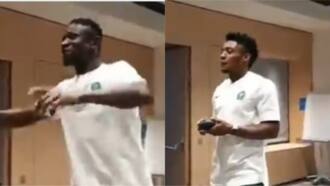 But while speaking with BBC Africa, Sunday Oliseh stated clearly that he wants to continue his coaching career in Belgium because of his family.

“The desire to work in Belgium is a personal one because I would love to be close to my family.

“Being around my family is a top priority, but professionally if something does come up abroad it would be something that I would consider.

“A consideration with a club abroad that permits for conversation about splitting time between Belgium and my work base is quite welcome.”

Despite writing his name in gold while playing football, Sunday Oliseh has not been able to replicate such feat into his coaching career.

Oliseh was in charge of the Super Eagles from 2015-2016 before he tendered his resignation letter to the Nigerian Football Federation.

Nigerian Football Federation however replaced Oliseh with Gernot Rohr who has been in charge of the Super Eagles since 2016. Earlier, Legit.ng had reported how Sunday Oliseh revealed how senior players refused a five-star hotel in Italy in preparation for the USA 94′ World Cup.

The Super Eagles were African champions before the tournament and were the fifth highest-ranked country in the world heading to the Mundial.

Oliseh stated that the designated hotel on the outskirts of Reggio Emili reserved for the players was rejected as they insisted it was not good enough.

The former Ajax midfielder claimed it became an issue between Nigeria’s technical adviser Clemens Westerhof and the group of senior players.