– Ighalo who is currently on holiday in the beautiful city of Dubai takes his beloved mother along, branding her as ‘Queen’

Former Nigerian international Odion Ighalo has taken his beloved mother on an expensive vacation to the beautiful city of Dubai.

The Al Shabab of Saudi Arabia striker who left Manchester United early this year is currently on holidays having helped his side to finish second in the Saudi Pro League behind Al Hilal.

The 31-year-old inspired the club with two goals as they defeat Al Wehda 3-0 in the final game of the season in the Saudi topflight. 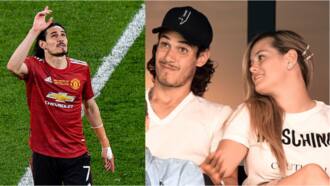 Ighalo who joined the club side on a two-and-a-half-year contract in February ends the season in style.

He finished the season playing 13 matches, scoring 9 and providing 3 assists to wrap up the campaign in style and then head for holidays alongside his mother.

In the latest clip posted on the striker’s Instagram handle, Ighalo can be seen helping his mum into a speed boat as they went for a ride.

He recently shared an adorable video of his lovely mother watching him play a professional match for the very first time after 16 years of his professional football career.

On Wednesday night, May 19, his Al-Shabab side hosted Al-Ain in Saudi League game which they won 5-1. Odion Ighalo made it 2-0 for the hosts with a fantastic goal in the 41st minute.

His mother can be seen celebrating his goal at the stands telling her son that she is impressed and the former Watford of England goal-poacher expressed delight that she was able to make it to the stadium for the first time. 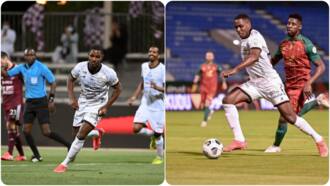 ”For the first time since 16 years Of My Professional Career, Mama was able to watch me play Live in the Stadium which is one Of the Happiest Days of my Life.”

The former Manchester United forward announced the development on his official Instagram page less than one hour ago and it is already generating commendations from fans and friends.

According to the retired Super Eagles attacker who won the AFCON 2019 golden boot prize in Egypt, the mobile application is free and can be downloaded at every app store online.