Legit.ng has compiled a list of some of the trending stories that got the attention of readers within the week of March 15 – March 19.

The top stories included in the weekly news review covers events from politics to current affairs.

Find the list of the biggest stories for the week below:

Not less than eight foreign universities in the Republic of Benin, Niger, and Cameroon have been banned by the National Youth Service Corps (NYSC) from taking part in the 2021 Batch A orientation course.

According to a report by Daily Nigerian, most of these schools, otherwise called Cotonou universities, award degrees a few months after matriculation.

Although the NYSC leadership did not state the reason for this drastic decision in its circular (dated Friday, March 5) to state/FCT coordinators, it informed all D&R and foreign-trained verification officers in states to take note. 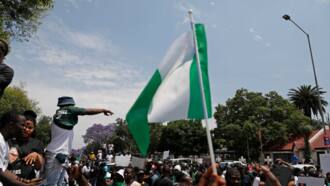 The federal government said it has begun the selection process for applicants who indicated interest to be employed under the N-Power Batch C.

Legit.ng reports that the minister of humanitarian affairs disaster management and social development, Sadiya Farouq, made this known on Thursday, March 11, via a thread of tweets.

She said the ministry has taken stringent steps to ensure that the registration, verification, and onboarding process would be carried out online and on a centralised system.

The Cable reports that he died on Tuesday morning, March 16 after a protracted illness which he had been receiving treatment for in South Africa since 2020.

The ICRC also confirmed the death of its director-general via its official Twitter page on the same day.

Southern Nigeria and middle belt leaders under the aegis of Nigerian Indigenous Nationalities Alliance for Self-Determination (NINAS) have presented a list of demands for their continued stay in the country.

NINAS is of the opinion that members are at the receiving end of a vicious ethnic cleansing by the Fulani herdsmen.

The Guardian reports that the forum made this known on Wednesday, March 17, at a world press conference at New Bodija, Ibadan, Oyo state.

The Ministry of Humanitarian Affairs, Disaster Management and Social Development recently announced the next stage of the enrolment for the Batch-C N-Power applicants.

Legit.ng notes that the ministry has made some new changes in the enrolment process, including the introduction of a new portal.

Also, as previously done, applicants are expected to write a test as part of the criteria for selection.

A former vice president, Atiku Abubakar, could be barred from contesting for the presidency if a suit seeking to disqualify him succeeds in court.

However, the politician has asked the Abuja division of the Federal High Court to dismiss the suit which is seeking to stop him from contesting in future presidential elections.

Vanguard reported that the legal action challenging Atiku’s eligibility to contest for the presidency was filed by a group under the aegis of the Incorporated Trustees of Egalitarian Mission for Africa.

Unlike in some other climes, a state governor is more accorded respect and wields more power than a senator in Nigeria.

This is the reason why every election cycle, serving senators abandon their legislative duties to contest for their political party’s governorship ticket.

As the 2023 general elections approach, a number of serving senators are already gearing up to contest for the governorship seats in their states.

The Independent National Electoral Commission (INEC) has been issued a 72-hour ultimatum to issue a certificate of return to Ifeanyi Ararume based on the result of the December 5, 2020, Imo North Senatorial bye-election.

The ultimatum was given in an order issued by the Federal High Court in Abuja on Thursday, March 18, Premium Times reported.

Justice Taiwo Taiwo ruled that having been declared as the valid candidate of the All Progressives Congress (APC), Ararume should be awarded a certificate of return by the electoral commission.