– Philip Shaibu, speaking on his relationship with Adams Oshiomhole, revealed the former APC chairman wanted to derail their plans

– According to him, Oshiomhole tried to wreck the mission of making poverty history in Edo state

Philip Shaibu, the deputy governor of Edo state, on Sunday, March 7, revealed that in his quest to rid the state of godfatherism, he was brutalised.

The Punch reports that Shaibu made the disclosure at the reception for the outgoing local government chairmen at St. Paul Catholic Church, Benin.

According to him, he has always been loyal to a worthy course as he ensured that Adams Oshiomhole, the then governor of the state successfully completed his two terms in office. 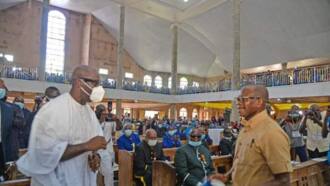 Edo deputy governor says he was brutalised in his quest to rid the state of godfatherism.
Photo credit: @HonPhilipShaibu
Source: Twitter

Shaibu while justifying his loyalty to Governor Godwin Obaseki stated that the immediate past chairman of the All Progressives Congress (APC) curtailed their plans over his godfather ambition.

The deputy governor who has since fallen out with Oshiomhole admitted that he supported Obaseki against the former APC chairman because he stood in the way of the fight against poverty in Edo.

Meanwhile, Legit.ng reported that despite their political differences, the Edo state governor and his predecessor seem to have settled their rift.

Both politicians on Saturday, March 6, exchanged warm greetings at an event in Auchi. Obaseki said he holds no personal grudges against Oshiomhole.

Obaseki made the disclosure at the Centenary Birthday Thanksgiving of Monsignor Thomas Oleghe and 18th Canonical Erect*on the Anniversary of the Diocese of Auchi held at Immaculate Conception Cathedral in Auchi.