Abuja – President Muhammadu Buhari on Thursday, June 17, commiserated with Zambia, the family, government and people over the death of its former president, Kenneth David Kaunda.

Kaunda died at a military hospital at the age of 97 in Lusaka where he was being treated for pneumonia, his son, Kambarage confirmed.

The Nigerian leader in a statement released by one of his spokesman, Garba Shehu expressed sorrow at the death of Zambia’s founding father, who according to him was one of the greatest African and world leaders of all time. 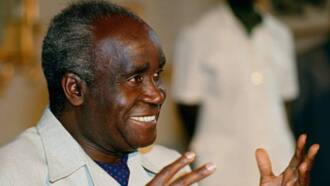 The president offered prayers to God, asking that the soul of the deceased be granted repose. He also prayed that all who mourn the departed activist be comforted.

The 97-year-old ruled Zambia from 1964, when the country won its independence from Britain, until 1991.

Kaunda was one of the first leaders of a new Africa, as countries rejected colonialism in favour of self-government.

Despite his early rejection of multiparty democracy, he was acclaimed as a modernizing influence on the continent. He is among the continent’s few surviving liberation heroes.

Meanwhile, the president of Chad, Idriss Deby, died of injuries sustained while on the frontline fighting rebels in the country, an Army spokesman announced on Tuesday, April 20.

Restructuring: President Buhari reacts, identifies who can handle it

It was reported that the development sparked reactions from Nigerians and others across Africa and the international community.

General Mahamat Kaka, the son of the deceased Chadian leader, was revealed as the country’s interim head of the state. The 68-year-old president came to power in a rebellion in 1990.