– Mohammed, one of the sons of the slain former presidential aide, Ahmed Gulak, has explained how the family received the sad news

– Gulak was assassinated on Sunday, May 30, in Owerri, the capital of Imo state, by unknown gunmen on his way to the airport

– According to him, his late father was in Owerri for the ongoing constitution review by the members of the National Assembly

Owerri, Imo – Barely 24 hours after his father was shot dead in Imo, Mohammed, son of Ahmed Gulak, a former aide of ex-president Goodluck Jonathan, has said that the deceased visited the state as a member of the committee on constitutional review.

Legit.ng reports that Gulak, a chieftain of the All Progressives Congress (APC), was killed on Sunday, May 30, in Owerri, Imo state capital.

It was gathered that the deceased was the chairman of the APC committee that conducted the primaries for the Imo governorship election in 2019.

My father’s personal assistant broke the sad story to us

Mohammed, who told BBC Pidgin on the incident, said that he was in his room on Sunday, May 30, waiting for a driver to take them to the airport to receive his father before news of the shooting broke.

He added that the deceased’s personal assistant was the first person to call the family via telephone to ask if they had heard what happened and ended the call when the response was in negative.

Gulak’s son also noted that the eldest son broke the news to the family when he entered the house in tears.

“On Sunday morning, I was in my room waiting for his (Gulak) driver to come so that we can go to the airport to bring him home.” Former governor finally breaks silence, reveals how he was tormented by Daniel, Amosun for 16 years

“It was our father’s personal assistant that first called via the telephone to ask us if we have heard what happened. When we said ‘no’, he ended the call. Maybe he did not want to break the news to us.

“A few minutes later, our eldest brother came into the house crying and he told us about the news of our father’s death. The first thing I did was to call his telephone line to confirm and it did not go through. Afterwards, everybody in the house began to cry.’’

Gulak was part of the committee on the ongoing constitution review

Speaking on what took Gulak to Imo, he noted that the deceased was part of the committee on ongoing constitution review.

According to him, his last conversation with his father was something he would never forget in his life.

“On Saturday, I called him at exactly 8 pm to greet and wish him safe journey back home the following day. He was happy and told me ‘God bless you, my son. He was part of the committee on constitutional review. He went to Owerri to carry out the work.” 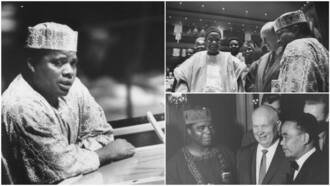 Jaja Wachuku: 6 facts about Nigeria’s 1st ambassador who protested racism at UN by ‘pretending to sleep’

Meanwhile, Legit.ng had previously reported that the police in Imo state said that the killers of Ahmed Gulak, were members of the secessionist group, Indigenous People of Biafra (IPOB) and its security arm, Eastern Security Network (ESN).

It was reported that Bala Elkana, the spokesperson for the Imo police command, made the claim in a statement via Facebook on Sunday, May 30.

He said Gulak’s killers were traced to their location within Imo where they were shot dead during a gun battle with police operatives.