Heavy gunfire shook a Mexican city as drug cartel members retaliated following the capture of their leader, who is wanted by the United States, authorities and witnesses said Monday.

Suspected Northeast Cartel gunmen clashed with security forces overnight in Nuevo Laredo in the northeastern state of Tamaulipas, near the border with the United States, after their alleged boss Juan Gerardo Trevino was arrested, officials said.

Trevino faces an extradition request from the United States for drug trafficking and money laundering, and arrest warrants in Mexico for murder and terrorism, the defense ministry said.

He is accused of leading the Northeast Cartel as well as a gang of hitmen that operates in five Mexican states, it said in a statement.

Trevino was detained with an unspecified number of gunmen after his gang opened fire on a military patrol in the city bordering Laredo, Texas, according to the ministry. 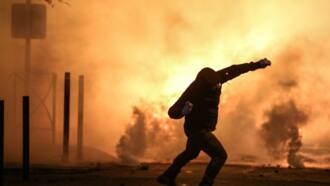 Residents shared videos on social media in which heavy and prolonged bursts of gunfire are heard and cars and trucks are seen set on fire.

The Northeast Cartel is a breakaway from the now-fragmented Los Zetas, which was founded by former elite soldiers.

Nuevo Laredo mayor Carmen Canturosas urged residents to take “extreme precautions” following the unrest, while the government said it would dispatch security reinforcements to the city.

Mexico has been trapped in a spiral of cartel-related violence since 2006 when the government launched a controversial anti-drug military operation.

There have been more than 340,000 murders since then, most of them blamed on fighting between criminals, according to official figures.