The 2023 presidential candidate of the ruling All Progressives Congress (APC), Bola Tinubu, has been described as someone who would become a ‘sleeping president’.

The national chairman of the New Nigerian Peoples Party (NNPP), Rufai Ahmed Alkali, urged Nigerians to ensure they do not vote for the former Lagos state governor popularly referred to as Jagaban.

Daily Trust reports that Alkali while reacting to a trending photo of Tinubu sleeping off at the Emir of Gombe’s palace over the weekend said NNPP was working hard to win the 2023 presidential election.

He said it is unbelievable that a presidential candidate is already dozing off in meetings even before the commencement of the campaigns ahead of the 2023 polls.

“How can a presidential candidate be sleeping even before the campaign starts? So that means that if you elect him, you will have a sleeping president for the next four years.

PDP crisis: Full list of Wike’s allies who pulled out of Atiku’s campaign

“Is that what you want – a sleeping president? Do you have confidence in him?”

Continuing, Alkali said that the NNPP’s presidential candidate, Rabiu Kwankwaso is a man of strength, substance and courage who is determined to take charge of the task ahead.

“Dr Rabiu Musa Kwankwaso is a man of substance; he is a man of courage; a man of determination and a man who has already made so much mark in his life.”

Nigerians across the country have been warned against throwing their support or votes for the All Progressives Congress.

This call was made by the former speaker of the House of Representatives, Yakubu Dogara, at a summit organised by the Nigerian National Christians Coalition.

Dogara said that Bola Tinubu ignored every warning issued by the Christain Association of Nigeria against his choice of a Muslim running mate. 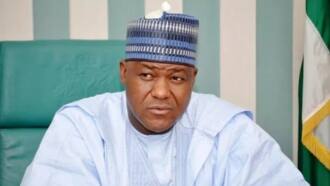 Bola Tinubu had earlier been described as one politician who has all the qualities needed to develop Nigeria as a country.

According to Shettima, Nigeria will experience immense progress should Tinubu emerge victorious in the forthcoming 2023 presidential election.