Home / Blog / Entertainment / He Had a Knife and His Car Smelled of Blood: BBN’s Khloe Shares Experience Similar to Alleged BRT Killing

He Had a Knife and His Car Smelled of Blood: BBN’s Khloe Shares Experience Similar to Alleged BRT Killing He Had a Knife and His Car Smelled of Blood: BBN’s Khloe Shares Experience Similar to Alleged BRT Killing


Big Brother Naija ex-housemate, Khloe has taken to social media to reveal that she had a similar experience to the alleged BRT killing.

The reality star shared a lengthy post where she highlighted how terrible the security situation in the country is.

He had a knife and his car smelled of blood

According to Khloe, her driver ordered a ride for her to the airport and from the moment she met the driver, something seemed off.

She must not die in vain: Outrage over death of young lady missing after boarding BRT

She pointed out that the driver was behaving weirdly and she found out that he had a knife under his leg and the car smelled like unpleasant blood and illegal substances.

It wasn’t until the reality star pretended to be on a call with her kid didter before the driver stopped the car and kicked her out.

Khloe added that the car details on the Uber app didn’t match when they eventually saw the car. She also shared receipts to corroborate her story.

“Something similar almost happen to me on the 1st of march in my way to the airport. What a country How can a whole Nigeria not have a surveillance Camera on every corner ???? At least it can help us navigate some horrible incident ? How can you just not care about us ? How can our security system always fail us ? why do we have to die untimely in the hands of our fellow humans? why ?????????” 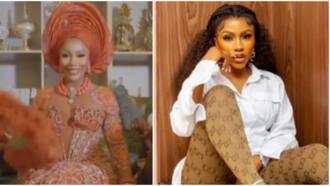 “I’m sure this would be happening everyday but bamise was wise to record it all and get the bus number, May God rest her soul and comfort her family.”

“Omo this must have been happening with many brts buses then ..God said their cup is fullWicked people. Election is close now .Epp is oo”

“Omo ‍♀️ one needs to be extra vigilant. No where is safe in this country. God help us ooo.”

“How do we begin to protect ourselves, it is now very obvious the country don’t care about us girls! This year alone how many girls have been killed without justice! “

Nigerian actor, Salami Rotimi cried out on social media after he was nearly a victim of kidnapping.

Taking to his official Instagram page, the obviously flustered film star explained how the event happened to his numerous followers.

The actor then accompanied the photo with a short caption where he noted that about three men were involved.