– Some citizens have accused the Attorney-General of the Federation (AGF) and minister of justice, Abubakar of violating the order prohibiting Nigerians from access the site

FCT, Abuja – The Attorney-General of the Federation (AGF) and minister of justice, Abubakar Malami has disclosed that he has deactivated his Twitter account.

However, several Nigerians who reacted to the post accused the AGF of breaking the order suspending the use of Twitter’s operations in Nigeria. 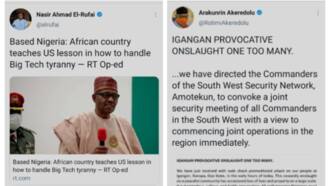 The social media users alleged that Malami must have used a VPN to bypass the ban to enable him to log into Twitter to deactivate the account.

Others criticised him for supporting the ban on the microblogging site.

Read some reactions below:

”This is evidence that you logged in Twitter today via VPN to deactivate your account which is punishable under your unlawful law. Let’s see how you will prosecute others without throwing yourself in jail.”

”Why deactivate? Just delete it. That’s all. Deactivation means you want to come back later when the storm is over. Just delete in solidarity to yourself as the PRESIDENCY.”

”At least you logged in to deactivate it.. With VPN right? A country where justice works should start the prosecution from you.’

Me too I want to deactivate, but I can’t log in. Please show me the way? Should I use VPN?” 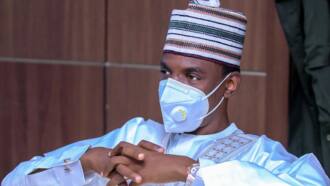 Meanwhile, President Muhammadu Buhari was on Tuesday, June 8, dragged to a court of the Economic Community of West African States (ECOWAS) over the recent ban on Twitter operations in Nigeria.

The lawsuit which described the federal government’s decision as illegal was filed by Socio-Economic Rights and Accountability Project (SERAP) and 177 Nigerians represented by a renowned human rights lawyer and activist, Femi Falana, PM News reported.

The plaintiffs are seeking an order of interim injunction restraining the Federal Government from implementing its suspension of Twitter in Nigeria.