– Taribo West arrived Inter Milan in 1997 a year after winning the Olympics in Atlanta, USA

Taribo had a remarkable two years at the club between 1997 and 1999 where he scored one goal in 44 appearances, but he made name for himself.

Despite being a defender, the former Super Eagles star became so fond of Brazilian star Ronaldo who won the Fifa Player of the Year Award back-to-back in 1996 and 1997. 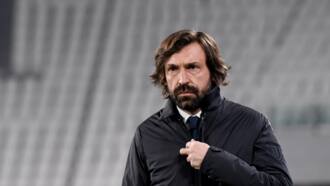 Ronaldo who played for five years at the club scored 49 Serie A goals in 68 appearances. He is still referred to as one of the greatest strikers to have played the game.

And pictures have surfaced online showing Taribo lacing Ronaldo’s shoes after fenômeno had scored a goal.

But a year before their arrival at Inter, West was part of the Nigerian Dream Team that defeated Ronaldo-led Brazil in the semi-final of the Olympic games enroute to winning the title.

Dream Team brushed aside a Ronaldo-inspired Brazil on the way to claiming the Atlanta Olympic Games gold medal.

Ronaldo who is now 44 stated that he had to endure a difficult period with the Nigerian who they later became teammates.

In an Instagram chat with Italian striker Christian Vieri monitored by ilbianconero, Ronaldo hinted that he endured a difficult time battling his future teammate. He said via Soccernet: 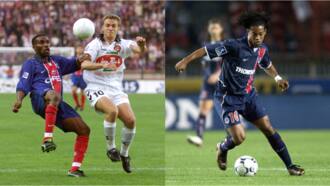 “I was in the under 16, and we were in retreat with the Brazilian national team for two weeks.

“At the time I was 15, and we made a friendly match with Nigeria Under-20 team where Taribo played.

“They were very fast; they were adults, we were only 15 years old. On that occasion, I exchanged shoes with Taribo, but we didn’t know each other yet.

“After so many years, we met at Inter.”

Meanwhile, Legit.ng earlier reported that the duo of Ronaldo and Vieri are not surprised that their former teammate ended up on the pulpit.

Vieri recounted how the former Nigerian star told his coach that God revealed to him that he should be in the starting line up of a game. In a live Instagram chat monitored by fcinter1908, the former Azzurri striker said of the Nigerian: