On Friday, June 25, the Joint Admissions and Matriculation Board (JAMB) released the results of candidates who sat for the 2021 Unified Tertiary Matriculation Examination (UTME) on Saturday, June 19 and Tuesday, June 22.

The Nation reports that the result, which was announced by the board’s spokesman, Fabian Benjamin, explained that the exercise was largely successful, adding that only fewer cases of malpractices were reported.

Legit.ng hereby lists the steps candidates should take to check their results without a scratch card:

1. Candidates are expected to send ‘RESULT’ via SMS to 55019 with the phone number they used in registration for JAMB.

2. If any candidate uses a phone number different from the one he registered with, he will get a response telling him the number was not used for registration.

3. Candidates who check their UTME results with their registered number will get a message which will read as “Dear Mr/Miss X, your result is as follows…”

4. But for candidates whose results were withheld by JAMB, the examination body will send them a message telling them “Result Withheld.”

2. If a result is withheld, a “Result Withheld” message will be sent to the candidate.

3. If a candidate belongs to the category being given the benefit of the doubt, the message to the person will be: “Result withheld pending the upload of clarifications/document required from you.”

4. If a candidate was absent, s/he would get “CANDIDATE ABSENT” as feedback

5. A candidate that was ABSENT WITH REGISTRATION NUMBER also CANCELLED will be so informed.

6. “Invalid Entrance into the Exam Hall” will be sent to a candidate who gained unauthorised access to the examination hall. 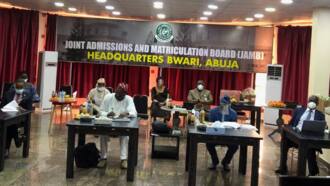 Meanwhile, Legit.ng had previously reported that the JAMB asked candidates who were scheduled to take the UTME in delisted centres to print new examination notification slips.

It was reported that the board’s spokesman, Fabian Benjamin, asked the candidates to start printing their notifications from Sunday, June 20, for their new schedule date and time.

The examination body said the decision followed the centres’ non-compliance to the laid-down procedures and the difficulties encountered by candidates posted to the centres.