Home / Blog / Entertainment / I Don Give You Before Na: Video of Portable Arguing With Women Who Asked Him for Money at Abule Egba Emerges

I Don Give You Before Na: Video of Portable Arguing With Women Who Asked Him for Money at Abule Egba Emerges I Don Give You Before Na: Video of Portable Arguing With Women Who Asked Him for Money at Abule Egba Emerges


Zazoo Zeh crooner, Portable is back with yet another controversial video on social media as he engaged some women in a fierce conversation.

Portable was spotted among the women who were hailing and singing his song as they demanded money from him.

The location was reported to be in Abule-Egba, Lagos where the singer angrily told the women that he has given them money before. 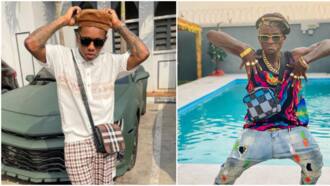 The happy women didn’t stop, they kept on calling more people to come and see the music star on their street while Portable angrily left the scene.

A number of social media users have reacted differently to Portable’s video with the women.

“This one no be celeb o na Caleb.”

“It must be very cold in Abule egba. See portable jacket.”

“This guy is always angry.”

“But why portable day always wear winter jacket for this Nigeria Hot Sun.”

“Na Olamide Badoo Cause all these ones.” My iPhone 13 can buy your car: Portable tells people advising him to limit his social media activities

“How person go get such December hit song and go back to trenches.”

“Portable no even look like celebrity at allzazuu to d world.”

Legit.ng previously reported that Portable accosted an individual who has been impersonating him on social media over the past few weeks.

A video captured the moment the enraged singer questioned the individual and threatened to deal with others who are still impersonating him.

Moments after the heated exchange, a fresh video surfaced online showing the moment Portable made peace with the individual.