Denmark attacking midfielder Christian Eriksen has caused worry among players and fans as the star collapsed on the pitch during their Euro 2020 opener against Finland.

SportStar are reporting that the Inter Milan star collapsed just before half-time as players panicked and called unto the medical team to attend to the star.

The tie was suspended for minutes after Eriksen remained unmoved, with the players and fans appeared visibly upset at the nature of the incident.

It was gathered that members of the Denmark squad had to circle the injured player so he could receive treatment in privacy. 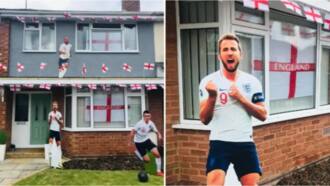 With the half-time whistle not blown, the Finland players began to walk off the pitch in the 55th minute.

Eriksen was carried off in a stretcher with the Denmark players surrounding him with a white cloth.

He stumbled forward in the 43rd minute and then fell to the turf as Thomas Delaney looked to throw the ball towards him to restart play in the Group B fixture.

Centre referee Anthony Taylor, alongside Danish players Delaney and Martin Braithwaite, among others, immediately waived towards the medical team to rush onto the pitch to assist the 29-year-old.

He was immediately given CPR by medics, with both sets of players looking on with great panic according to Independent.

His former club Tottenham have reacted to the incident. They wrote:

“All of our thoughts are with Christian Eriksen and his family.”

While an England statement read:

“Our thoughts this evening are with Christian Eriksen and his family, and all connected with the Danish Football Union.” 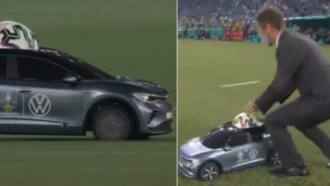 As at the time of filing this report, UEFA has suspended the tie and it was goalless before the decision.

Meanwhile, Legit.ng earlier reported that a fan of the Three Lions of England ensured that while his girlfriend was at work, he spent about two hours decorating their entire house in flags and cardboards in support of England.

Gareth Southgate’s side take on Croatia on Sunday, June 13, in a highly entertaining fixture with the match already gathering momentum ahead of kick-off.

Dave mischievously ripped their home in red and white – with cutouts of Harry Kane, Phil Foden and Raheem Sterling all visibly seen at the front of the house.