– The development has been described as “heartwarming” by the ruling party, the APC

– The victims, mostly students, have been reunited with their parents and families

The All Progressives Congress (APC) has described as heartwarming the release of the Kagara students and their teachers from the hideout of their abductors.

In a tweet, the ruling party said it is pleased with the release and appreciated the “government’s efforts at all levels including non‑state actors.”

The APC maintained that the victims have been reunited with their family members and relatives following their release. 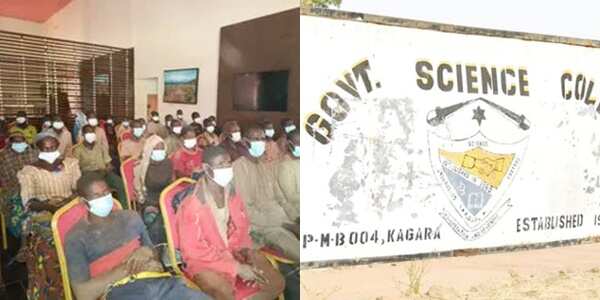 APC said the victims have been released to their families.
Credit: @OfficialAPCNg
Source: Twitter

“It is truly heartwarming that the #KagaraBoys, others have been reunited with their families and loved ones. APC appreciates government’s efforts at all levels including non‑State actors which ensured the safe release of the abductees,” the tweet read.

Legit.ng had reported that some suspected terrorists on Tuesday, February 16, stormed the government college, shot sporadically, with one student feared killed and several others including the teachers abducted.

This is coming months after a similar plot played out in Katsina state where schoolboys were abducted in Kankara local government.

They were later released after dialogues between the bandits’ leaders and representatives of the federal and Niger state government.

The president’s reaction was contained in a statement on Saturday, February 27, through one of his media aides, Garba Shehu.

He also commended the security agencies and the of Niger state government for their responses in securing the release of the students.