Victor Osimhen has been on fire since the start of the season having scored seven goals and one assist in eight appearances for Napoli so far this campaign.

His performances have now seen his value rise to the tunes of about €10 million on the transfer market lately.

The 22-year-old former Lille attacker has now equalled his Wilfred Ndidi’s €60 million market valuation according to latest report on Transfermarkt.

Just two years ago, the Ultimate Strikers Academy product joined Sporting Charleroi in a deal around €3.5m but joined his current club in a club record signing in the summer of 2020.

And all six stars made the Transfermarkt’s most valuable eleven, with Osimhen set up front alongside Martinez in a formidable lineup that also has AC Milan trio of goalkeeper Maignan and full-backs Hernandez and Calabria.

Legit.ng earlier reported that Nigerian striker Victor Osimhen has continued to attract positive reactions from the legends of the round leather game. 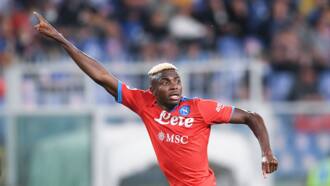 Chelsea icon Gianfranco Zola is the latest to shower encomiums on the forward who currently holds Africa’s most expensive player tag.

A few days after scoring twice to help Napoli secure a draw in their Europa League opening group game, the 22-year-old found the back of the net again in their 4-0 triumph over Udinese on Monday, September 20.