Ogun – Members of MKO Abiola’s family have said that they feel abandoned by the federal government.

The spokesman of the family, Rahaman Abiola, who made this position on Saturday, June 12, in Ogun state said the government has failed to keep its promises made some years ago, Punch reports.

Speaking at Abeokuta, the capital of Ogun state on Saturday, Abiola claimed that so far, the family is yet to gain anything from the leadership.

He said this when a delegation of the state government led by the deputy governor, Noimot Salako-Oyedele, paid the family a courtesy visit.

However, the family’s representative praised the president for honouring the late politician with the Grand Commander of the Federal Republic award, Daily Trust also reported.

“We are happy indeed that President Muhammadu Buhari deemed it fit to honour Abiola by giving him the GCFR and made June 12 official Democracy Day. Kudos to that. So far so good, we have not benefitted anything from the federal government.”

He also hailed the state government for never failing to come around to mark the memorable day with the family.

“Ogun state government will always come with all the machinery to mark the day. Our breadwinner has gone. We have not seen promises from the FG yet. 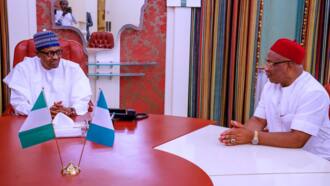 “On June 12, the state government is trying its best. I give kudos to them on June 12. Governor comes here always to pay solitary to the house and empower us to make sure June 12 is celebrated all the time.”

Meanwhile, Mudashiru Obasa, the speaker of the Lagos state House of Assembly, had congratulated Nigerians on the 28th anniversary of democracy in the country.

Obasa, in a statement made available to Legit.ng, noted that the very fact that citizens have remained together in this system of government reveals their respect and love for a system that ensures freedom and basic human rights.

The speaker of the state’s legislature said the fact that the country has remained united in spite of differences and challenges is proof that there is mutual love deep in the hearts of Nigerians. Read more: