– This deal was announced by the minister of interior, Rauf Aregbesola, on Tuesday, April 6

The federal government has promised to offer amnesty to inmates of the Owerri Correctional Centre who were recently let loose by gunmen in Imo state.

The offer was specifically made by the minister of interior affairs, Rauf Aregbesola, on Tuesday, April 6.

However, Aregbesola made it clear that the government will keep to its promise only if the inmates who are now are large return to the facility, The Nation reports.

Aregbesola noted that the ministry will not fail to arrest and prosecute those who are behind the attack. JUST IN: Unknown gunmen burn down another police station in Imo state

“We will surely get them wherever they are.”

Regretting attacks on correctional facilities and police stations in the country which are quite reminiscent of the woeful EndSARS protest days, the minister ordered the relocation of Owerri Recreational Club and other structures posing a security threat to the facility.

According to Punch, the former Osun governor said the Imo jailbreak is the worst in recent Nigerian history.

The group aims to achieve the Biafra Republic by engaging in war with the Nigerian government.

“If you look at it, they are not attacking ordinary people. They are attacking the police, the army, and the air force that is what they are doing. 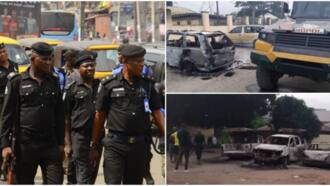