– The EFCC has released Rochas Okorocha, the former Imo state governor from detention

– The lawmaker representing Imo West was, however, released on Thursday, April 15

Former governor of Imo state, Rochas Okorocha has regained his freedom after spending 2 nights in custody of the Economic and Financial Crimes Commission (EFCC).

Daily Trust reports that the senator who represents Imo West Senatorial District in the National Assembly was released by the Economic and Financial Crimes Commission (EFCC) on Thursday, April 15.

This was made known by Okorocha’s aide, who disclosed that the former governor was released around 5:45 pm and he’s currently in his Maitama residence in Abuja.

It would be recalled that Okorocha, who governed Imo between 2011 and 2019, has been accused of embezzlement and misappropriation. 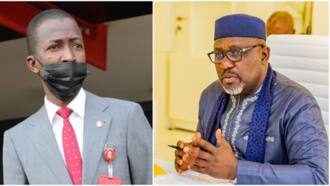 Premium Times had earlier noted that Okorocha passed the night at the detention facility of the commission in Wuse 2, Abuja.

Sources in the anti-corruption agency said the reason the former governor wasn’t released earlier was that operatives had been interrogating him since his arrest.

The EFCC had on Tuesday, April 13, arrested Okorocha at his Unity House private office in Abuja around about 4 pm.

Meanwhile, Legit.ng reported that Okorocha explained what transpired between him and the operatives of the EFCC on Tuesday, April 13, in Abuja.

The ex-governor said the anti-graft agency only invited him to make some clarification over the alleged misappropriation of public funds.

Okorocha said since the anti-graft agency was only doing its job, he would cooperate fully with it.

Okorocha finally breaks silence on his arrest by EFCC, reveals next plan

In another report, Okorocha advised against politicising the security challenges in Imo state, even as he blamed the recent attacks on poverty and injustice.

The former Imo state governor made the comment while briefing journalists in Jos, the Plateau state capital, on Thursday, April 8.

The senator who represents Imo West called on the government to urgently address the issues before it escalates.

He added that life is sacred and no human has the right to take another person’s life.