Odinga has 52.54 percent of the vote against 46.76 percent for Ruto, according to figures issued by the Independent Electoral and Boundaries Commission in the early afternoon based on results from about 30 percent of polling stations.

Kenyans are still waiting for final results five days after the country, considered one of the most dynamic democracies in Africa, went to the polls on Tuesday.

Odinga, 77, is making his fifth stab at the top job with the support of his longtime foe, the outgoing President Uhuru Kenyatta who has already served two terms and cannot run again.

Ruto, 55, has been deputy president for almost a decade but was left out in the cold after a pact between Odinga and Kenyatta in 2018 that stunned the nation. 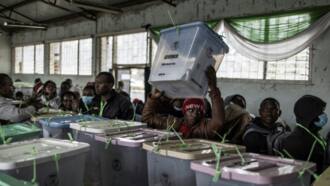 The election commission on Friday acknowledged that the vote tallying was moving too slowly after appealing for the nation to be patient.

It also denied that its results portal had been compromised, insisting its systems were secure.

Kenyans had been left confused when television stations which have been providing rolling coverage of the election, suddenly stopped broadcasting provisional results on Thursday.

The election is being seen as a test of the stability of the East African powerhouse, which has seen past votes marred by rigging and deadly violence.

Although the long campaign was acrimonious and marred by disinformation, polling day passed off largely peacefully, with independent observers saying the vote was orderly although not without challenges.

The winner of the presidential race needs to secure 50 percent plus one vote and at least a quarter of the votes in 24 of Kenya’s 47 counties.