– A Twitter user identified as @IrunmoleWeil shared the story on his page, saying the person in question is his friend

– According to @IrunmoleWeil, the groom who earns N120k monthly took a loan of N800k to fund his wedding

– The young man had hoped that guests would gift him cash, but he was disappointed at the end of the day 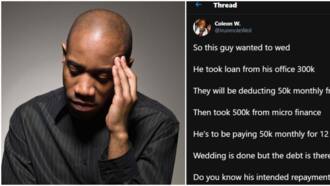 A Nigerian man with the Twitter handle @IrunmoleWeil has taken to the social media platform to disclose that his friend borrowed money to fund his wedding in the hope that guests would gift him cash.

@IrunmoleWeil said his friend who earns N120k monthly took a loan of N300k from his office and another one of N500k from a microfinance bank. A young man said his friend got himself into debt ahead of his wedding ceremony.
Photo credit: Pius Utomi Ekpei/AFP
Source: Getty Images

According to him, his friend’s office would be deducting N50k from his salary monthly while the microfinance bank would also deduct the same amount.

He said the wedding guests only gifted the groom gas cylinders, plats, spoons, turning stick, among others.

“He rented a shop for his wife before wedding 1/6 months, she sells provisions. Now the shop is empty and no money to restock because they’ve used most of The money to repay one debt or the other and also feed. Now they have 8months running in an empty shop he’s trying.” 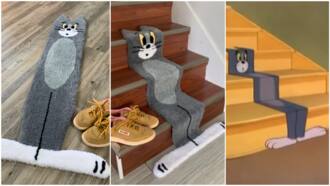 “Trying to impress the public when your primary purpose is to impress each other for a life time. Misplaced priority, i just hope people get to learn from other people(s) sad experiences.”

“He was pressured into elaborate wedding but he doesn’t understand that wedding isn’t the deal. After that day is. And the marriage that will last isn’t linked to how much noise were made.. The weddings guests ń family that made him do this are nowhere to be found now.”

“My aunt didn’t allow her husband to rest that her wedding must be loud till today they have not finished paying for the hall.”

In other news, former presidential aide Reno Omokri has given a piece of advice to Nigerian men who are planning to get married without a job or a steady income. 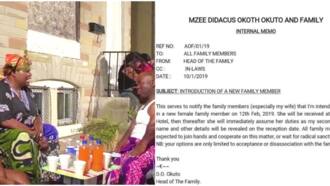 Married man moves to bring in a second wife, writes memo to family members, photo of the letter cause stir

The politician took to his Twitter page to advise his followers against marrying and welcoming kids to the world without a job.

He said anyone who makes the mistake of doing such has automatically made an agreement with poverty.