– In the incredible video, the man flew in reverse unbothered by oncoming vehicles as he transports himself

– Some Nigerians have expressed desire for it to be used in the country, while others expressed fear about it

A video of a man transporting himself via a flying hoverboard on a busy road has send social media into frenzy.

In the incredible video shared on Instagram by @kingtundeednut, the fearless man rode in reverse unfazed by commuters.

The unidentified man showed great mastery of the fine tech device as he controlled it. The trip seemed to have been taken in the night. 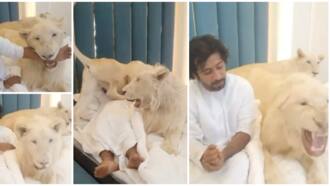 Man plays with two lionesses on bed, puts his arm into the mouth of one of them in stunning video, many react

People clamour for a flying hoverboard in Nigeria

The video sent chills down the spine of some viewers but it was interesting to behold for others.

Some Nigerians opined that if introduced in Nigeria it will help reduce traffic jam. Many others expressed safety concern of the technology. There were those who passed funny remarks about it.

“If person use this one for naija, people go dey shout, no be juju be that.”

“Until witches and wizards will start controlling it with one invisible remote from the village then you will prefer the nepa poles.”

“Once people start buying it now, them go begin get traffic.”

Meanwhile, Legit.ng previously reported that a young Igbo man had built an aeroplane and flown it. 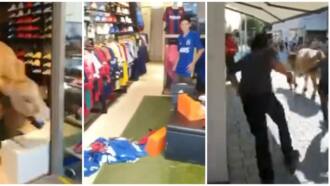 Speaking with BBC News Pidgin, the innovator added that he woke up one day and just wanted to build something new.

The young man said despite the fact that people think building an aeroplane is hard, he considers it an easy task.

According to him, before setting out to work on the gadget, he went online to make findings on the materials needed. The man said the only thing he had to buy was the remote control, adding that the whole building process took him a month.