The Russian journalist who interrupted a state TV news broadcast by holding up a sign protesting against the country’s invasion of Ukraine has been fined.

There were fears that Marina Ovsyannikova had gone missing following her stunt, after a human rights lawyer said she had not been heard from for several hours.

However, a photo surfaced on Tuesday afternoon of Ms Ovsyannikova with her lawyer.

During a live broadcast on Channel One on Monday evening, Ms Ovsyannikova, who is thought to have worked for the company for years, walked on to the set behind the presenter with a placard denouncing the country’s invasion of Ukraine – a move the Kremlin has described as “hooliganism”.

It was a risky protest in a country where independent media has been blocked or shuttered, and it has become illegal to contradict the government’s narrative of the war.

The UN’s human rights office called on Russian authorities to ensure that she “does not face any reprisals for exercising her right to freedom of expression”.

Mr Chikov, who is head of the Russian human rights group Agora, said Ms Ovsyannikova had been arrested and taken to a police station in Moscow.

There were fears she may face charges under a law designed to clamp down on free speech.

The law, passed on 4 March, makes public actions aimed at discrediting Russia’s army illegal and bans the spread of fake news or the “public dissemination of deliberately false information about the use of the Armed Forces of the Russian Federation”. The offence carries a jail term of up to 15 years.

What did Ms Ovsyannikova do on air?

The placard Ms Ovsyannikova held read in English: “No war. Russians against war.”

In Russian, it said: “NO WAR. Stop the war. Don’t believe propaganda. They are lying to you here.”

She could still be heard after the broadcast was switched to alternative output. 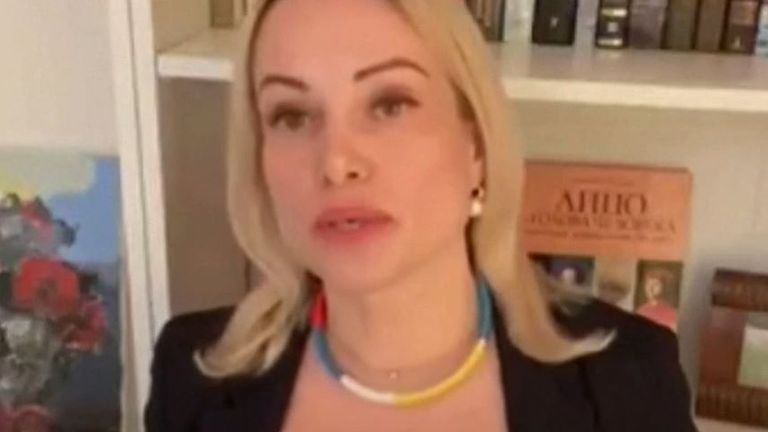 Ms Ovsyannikova, who said her father is Ukrainian and her mother Russian, also released a video of herself before her demonstration, in which she blamed President Vladimir Putin for the war.

She said that “unfortunately” she had been working for Channel One in recent years, working for the “Kremlin’s propaganda and I’m very ashamed of it – that I was letting them tell those lies from the TV screen… and allowed the Russian people to be zombified”.

She added: “We kept silent in 2014 when all of this was just in the beginning (annexation of Crimea). We didn’t go to rallies when the Kremlin poisoned Navalny. We just silently watched this inhumane regime. Now the whole world has turned away from us, and even 10 generations of our descendants will not be enough to wash away the shame of this fratricidal war.

“We, the Russian people, thoughtful and smart. It’s up to us to stop this madness. Go to rallies, don’t be afraid of anything, they can’t imprison all of us.”

Channel One, which is broadcast throughout Russia and has more than 250 million viewers worldwide, said it was conducting an internal review into the incident, TASS reported. The channel closely follows the Kremlin line that Moscow was forced to act in Ukraine to demilitarise and “de-Nazify” the country in a “special military operation”.