– According to her tweet, her sister was given a cutlass as a wedding gift

When it comes to wedding gifts, it appears there is no limit to how weird things can get due to the anonymity created by a gift wrap.

Twitter user, @baddestchef, took to social media to express dismay after her sister was gifted with a cutlass on her wedding day.

The chef expressed her confusion as she shared a photo of the tool wrapped in a deep pink gift wrap looking rather conspicuous. 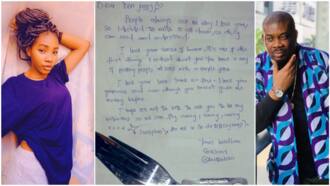 “why would someone give my sister a wrapped cutlass as a wedding gift?”

The post which made it to Instagram, had several people sharing their thoughts about the nature of the wedding gift.

While some found it oddly amusing and made jokes about her using it as a chef, there were some who expressed that it signified something dangerous.

“That’s not a gift it’s called AROKO in Yoruba .. they should be careful.”

“Aroko is a Social Symbol of Communication Among Yoruba Natives, mainly before the coming of western culture. The cutlass might symbolise war as it’s synonymous with Ogun, who is god of war and cutlass is one of his military weapons.”

“Since u re a chef.. U can collect the knife from your sister.. For cutting akwara anu.”

“Maybe during new year, she posted about how she want to cut off fake friends and people. So the person bought her cutlass. And for when she finds side chic inside her husband bedroom. Na to keep am by the door.” 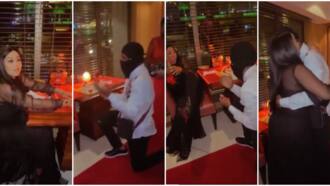 “Most people here are laughing not knowing the consequence of such gift. She had better find a strong pastor to pray for her before calamities start happening in her family.”

Kumashe Yaakugh is a Legit.ng journalist with three years of working experience in the media industry. She graduated from Benue State University with a Bachelor’s Degree in Mass Communication. Kumashe is an entertainment editor reporting mostly on entertainment and human interest stories. When she isn’t working, Kumashe uses her spare time to read about historical events, music and cultures around the world. Learn more about her on Twitter @kvmashe