Salah was the man of the moment as the Reds tore apart their arch-rivals at Old Trafford in what was one of United’s heaviest defeats in their recent history.

The Egyptian struck three times to fire Jurgen Klopp’s men to victory, leaving Ole Gunnar Solskjaer on the verge of being sacked. While his treble of goals saw Salah go home with the match ball, it also afforded him a place in the history books of the English topflight as he set two records.

According to the Premier League, the former Roma star is now the first player to score a hat-trick at Old Trafford.

Additionally, the forward has now become the highest-scoring African player in the history of the EPL. The three goals took his tally to 107, the most by any African footballer in the league.

Chelsea legend Didier Drogba has been the holder of the record, thanks to his stunning career at Stamford Bridge that saw him score 104 times. 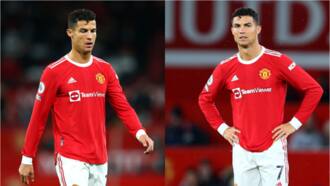 Salah has been in scintillating form since the start of the season and has scored in every game this term against Burnley when his side won 2-0.

Earlier in the campaign, the Egyptian became the quickest player to reach 100 Premier League goals for the Merseysiders.

Legit.ng earlier reported that Manchester United are gradually drifting away from the Premier League title contention this campaign as they currently sit in the seventh position with 14 points after nine games.

The Red Devils suffered a humiliating 5-0 defeat to their greatest rivals Liverpool at Old Trafford on Sunday, October 24.

Despite coming back from two goals down to beat Atalanta 3-2 in their last Champions League last week, Ole Gunnar Solskjaer’s men looked completely overwhelmed by their visitors yesterday.