BBNaija season 3 star and actress, Iheme Faith Uloma better known as Ifu Ennada is causing a major talking point on social media and her fans are loving it.

The reality star shared beautiful photos of herself showing off her beautiful body and sipping juice while declaring that her next man will enjoy so many goodies.

She also bragged that she has a mix of waywardness blended with a touch of Godliness so her next man is in for a big treat. 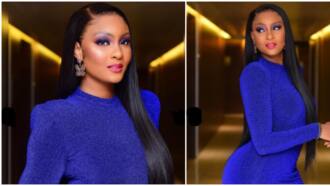 The actress also asked her fans to pick their favourite from the beautiful photos she posted:

Nigerians have reacted to the beautiful photos Ifu Ennada shared and commended her beautiful body.

“The Body, the Skin, the Glow.. You look absolutely stunning boss.”

“Lekwa somebody’s waist and stomach❤️ and my own looks like Geepee.”

“I love this caption the skin is heavenly thou.”

“Intimidation wahala for who skin no clean.”

Ifu Ennada says she is attracted to older men 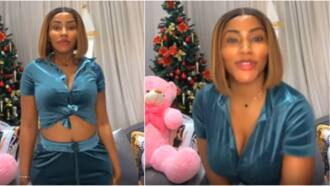 What have you done to your face again? Fans ask Mercy Eke, accuse BBNaija star of working on her features

Legit.ng earlier reported that former BBNaija housemate, Ifu Ennada dropped a piece of interesting information about her choice in men.

The 28-years-old Ifu said via her Instagram story channel that she always had a thing for men who are older than her.

She also shared a photo of a 50-year-old Russian musician whom she seemed to have a crush on.