My Parents Thought I Would Love Books as a Physically Challenged Child: Nigerian Man Tells His Story ▷ Nigeria news My Parents Thought I Would Love Books as a Physically Challenged Child: Nigerian Man Tells His Story ▷ Nigeria news

A physically challenged Nigerian man, David Adesina, has taken to his LinkedIn page to say that nothing should limit one from chasing their dreams.

Telling his story as a person living with a disability, David said that everybody thought that due to his condition, he would have the full time to focus on his books and come out in flying colours. 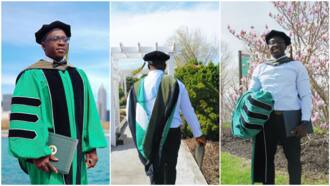 The young man said the reverse was the case as he got more excitement from activities outside the classroom.

He revealed that he was more inclined towards sports as he was the chief supporter of his sport houses in secondary school, always showing up for their training sessions.

David said he never participated in sport because he did not think he could do it and people never gave him a chance.

He, therefore, used his life as an example, saying people should not conform to societal norms because they are physically challenged.

“People are making waves internationally simply based on the disabilities they have & I think you can also. Simply look for your happy place & build on it to make one, two, six, ten more persons happy also. THE WORLD NEEDS YOU. DON’T DULL US.” 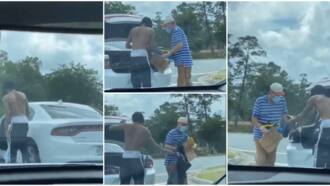 Shirtless student gets out of his car to give his belongings to homeless man, video goes viral

Legit.ng compiled some of the reactions to his post below:

“Congratulations bro… I remember you at FAJ Hall that year.”

“Well done David. The sky is your starting point.”

“Deep. Thanks for sharing. You are doing so well David. Thank you for not looking down on yourself. You keep winning.”

A man blessed many

Meanwhile, Legit.ng earlier reported that Michael Showunmidemonstrated that one does not have to be well-to-do physically to make another person smile. The maths teacher surprised two kids by as he paid their school fees.

Michael said he had visited his primary school and informed the school’s principal that he desired to pay the fees of two challenged students.

It was then he came in contact with Timi and Fridause, two students who were struggling to pay their school bills.