Nigeria in trouble as gunmen kidnap a year old baby, 7 others in Taraba ▷ Nigeria news Nigeria in trouble as gunmen kidnap a year old baby, 7 others in Taraba ▷ Nigeria news

– Also, the criminals forcefully snatched a year old baby from her mother

At least 10 gunmen mounted a roadblock near Chanchangi town, located along Takum-Wukari road on Monday evening and forced a commercial van conveying 10 passengers from Takum to Wukari town into the forest.

Maiwada Takum, relative to one of the abducted travellers, told Daily Trust that the kidnappers took seven people hostage.

They also took a one-year-old boy from his mother, who was travelling on the bus.

He said the van, a Sharon, was later found in a part of the Benue forest that shares boundary with Chanchangi town.

10 gunmen mounted a roadblock near Chanchangi town, located along Takum-Wukari road on Monday evening, kidnapping 10 passengers in a van, including a baby. Photo: PoliceNG
Source: Twitter

Maiwada said the kidnappers have not called relatives of the abducted passengers. 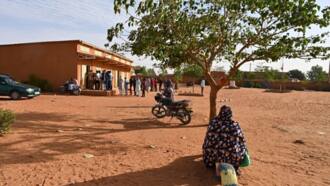 Maiwada stated that this is the second time in three months the kidnappers abducted large number of persons from Takum town traveling along Takum-Wukari road and almost at the same spot.

Police spokesperson in the state, ASP Leha Reform could not be reached for comment over the incident as his line was switched off when our reporter called him.

Also, Legit.ng reported that a senior officer with the Edo police command was kidnapped by gunmen who broke into his apartment in Benin, capital of the state.

The latest victim, identified as ASP Clement Amoko, was reportedly taken away in the presence of his wife and children.

Going further, the news outlet added that the kidnappers have already made contact with the family members to demand ransom.

In another report, unknown gunmen attacked the staff quarters of the Federal Airport Authority of Nigeria (FAAN) at the Kaduna Airport.

The criminals who struck in the wee hours of Saturday, March 6, whisked away some staff members and their families.

According to locals near the airport, the gunmen were wielding dangerous weapons.

Similarly, Legit.ng reported that the home town of Muhammad Maigari Dingyadi the minister of police affairs, in the Bodinga local government area of Sokoto, was severely attacked by some gunmen on Thursday, March 4.

The criminals reportedly abducted the daughter-in-law and wife of the chief Imam from the raided community.