– This was contained in a statement issued by army spokesman, Brigadier General Mohammed Yerima

An attempt to abduct students of Turkish International Secondary School, Rigachikun, Kaduna, has been foiled by troops of 1 Division in the state, the Nigerian army has confirmed.

According to Yerima, the school was protected by troops when bandits headed to the Federal School of Forestry Mechanisation, Afaka, Igabi LGA of the state.

The army spokesman explained that the troops quickly mobilized to protect the school from the bandits after receiving a tip- off on the impending abduction of the students. 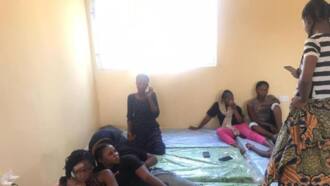 Yerima said while the soldiers were protecting the school, they got another distress call that bandits had stormed the Federal School of Forestry Mechanisation to kidnap the staff and students.

The troops swiftly moved to Afaka and decisively engaged the armed bandits following the breach into the school.

He added a combined team of security operatives are currently combing the forest for the bandits.

Earlier, Legit.ng reported that a gang of gunmen on Friday, March 12, kidnapped many female students of the Federal College Of Forestry Mechanisation in Birnin Gwari local government area, Kaduna state.

The tragedy was confirmed by the state’s commissioner for internal security and home affairs, Samuel Aruwan.

Aruwan also reported that investigations into the attack to ascertain the number of victims had been launched.

Fortunately, the 172 abducted students regained their freedom. Aruwan, on his Facebook page on Friday, March 12, said that the rescue operation was carried out by troops of the Nigerian Army.

The commissioner revealed that 130 male students, 42 female students, and eight staff members were set free from the kidnappers’ den.

He went on to state that some students are still nowhere to be found at the moment.