– Super Eagles of Nigeria were on Friday night, June 4, defeated by Cameroon in international friendly game

– Nigeria and Cameroon will be meeting again in another international friendly game on Tuesday, June 8

Alex Iwobi has been attacked by Nigerian football fans who claimed the Everton star disappointed them following the Super Eagles defeat against Cameroon in international friendly on Friday night, June 3.

Super Eagles went into this game against the Cameroonians with the hope of them continuing their dominance over them, but they were unable to get the win this time around.

Nigeria started the match impressively with the likes of Etebo and Iheanacho doing perfect job in the attack, but they were unable to break the defense of the Cameroonians. 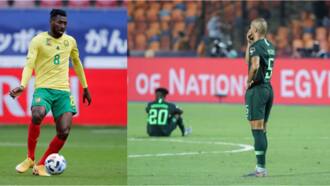 Minutes later, Cameroon changed their pattern of play to a more attacking one and they had to wait until 27th minute before scoring against Nigeria.

Andre-Frank Zambo Anguissa scored the goal for Cameroon in which goalkeeper Maduka Okoye was beaten nicely.

Below are some of the comments made by fans condemning Alex Iwobi.

Earlier, Legit.ng had reported how the Indomitable Lions of Cameroon defeated the Super Eagles of Nigeria in an international friendly at the Stadion Weiner Neustadt, Vienna, Austria.

Nigeria and Cameroon face off in double friendlies in preparation of the World Cup qualifiers slated for August this year.

Both teams approached the encounter playing for pride as it was explosive right from the start to the end of the encounter.

The Cameroonians made their intentions known as early as the 5th minute when Nigeria’s goalkeeper Maduka Okoye made an important save. 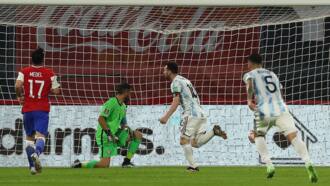 In the 20th minute, Kelechi Iheanacho made an attempt to break Cameroon’s defence line but he met resistance from two defenders who ensure the ball went out of play.

In the 36th minute, Nigeria’s Moses Simon was set up brilliantly by Alex Iwobi who had driven from the right flank into the middle of the pitch before releasing the ball to the Nantes winger who then cuts in before aiming for goal but the goalkeeper was able to send the ball out of play.

And against the run of play, the Indomitable Lions opened the scoring in the 37th minute through André-Frank Zambo Anguissa who released a low but powerful shot from about 25 yards leaving Maduka Okoye hapless in goal. 1-0 Cameroon.