– According to @drpenking, the Nigerian doctor had finished his shift but had to work eight more hours because his colleague that was supposed to take over from him had a car accident

A man with the Twitter handle @drpenking has got people talking on the social media platform after sharing a story of a Nigerian doctor who got an award at his workplace in the United States because he worked extra hours.

@drpenking said the doctor finished his eight-hour shift and his colleague who was supposed to take over from him had a car accident on his way to work. 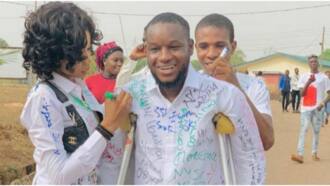 The Nigerian doctor decided to work another shift on behalf of his colleague. This kind gesture got him the employee of the year award.

“Meanwhile Nigerian Doctors work 72hour shifts yet are starved of their salaries for 3 months+ ‘n are still addressed by some seniors as Crossbreeds of Orangutans and Vultures. Nigeria is the hell you read about in the Bible, just that Satan here wears white Agbada and has gap tooth.”

“I’m an intern eye doctor. I’ve not been paid for 5 months. We want to do a protest, but we have been warned that if we try, our appointment will be terminated. Nigeria is surely hell.”

“See ehn! I once left the office at 10pm cos I was told that the job was very important and couldn’t wait. 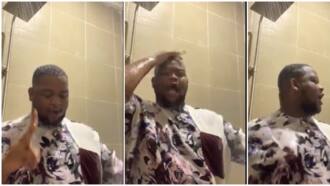 “Got to work 30mins late the following day and they queried the life out of me like I was the most incompetent person ever.”

In other news, a Nigerian lady named Ibukunoluwa Yusuf celebrated her achievement after becoming a medical doctor.

Ibukunoluwa, who took to her LinkedIn page to narrate the journey of seven years, said it was characterised with joy, pain and tears.

“I Still remember the day my name came out about 7 years ago on the admission list for medicine and surgery, I was overjoyed. It was indeed a dream come true.

“Since that moment on, I’ve lived my life in the service of this dream. It’s been 7 years of joy, 7 years of pain, 7 years of tears, 7 years of celebrating my little wins level after level and 7 years of hope.”