Nigerians have expressed displeasure over the exclusion of Afrobeat legend Fela Anikulapo Kuti, who was nominated for induction into the Rock and Roll Hall of Fame for 2021.

The Nation reports The Rock and Roll Hall of Fame had published 16 nominees for its 2021 class of inductees and on the list is the Afro beat originator, who many believed had been eligible for some time and is finally being recognised for the honour.

This is the first time Fela is being nominated to the prestigious Rock and Roll Hall of Fame.

But an announcement by the organisers on Wednesday showed Fela had missed out as an inductee of the 2021 Rock and Roll Hall of Fame despite placing second in the fan vote category which creates a single official ballot.

Turner had led the fan vote with more than 585,000 ballots cast in her favor, beating Afrobeat pioneer Fela Kuti — who secured the runner-up position with more than 545,000 votes.

Jay-Z, the Foo Fighters, The Go-Go’s, Carole King, Todd Rundgren and Tina Turner were announced as the newest inductees into the Rock & Roll Hall of Fame, according to the organiser.

Speaking of the new inductees, John Skyes, the Chairman of the Rock & Roll Hall of Fame Foundation, said: “This diverse class of talented Inductees reflects the Rock Hall’s ongoing commitment to honor artists whose music created the sound of youth culture. It will make for an unforgettable live celebration of music in October at this year’s Induction Ceremony in Cleveland.” 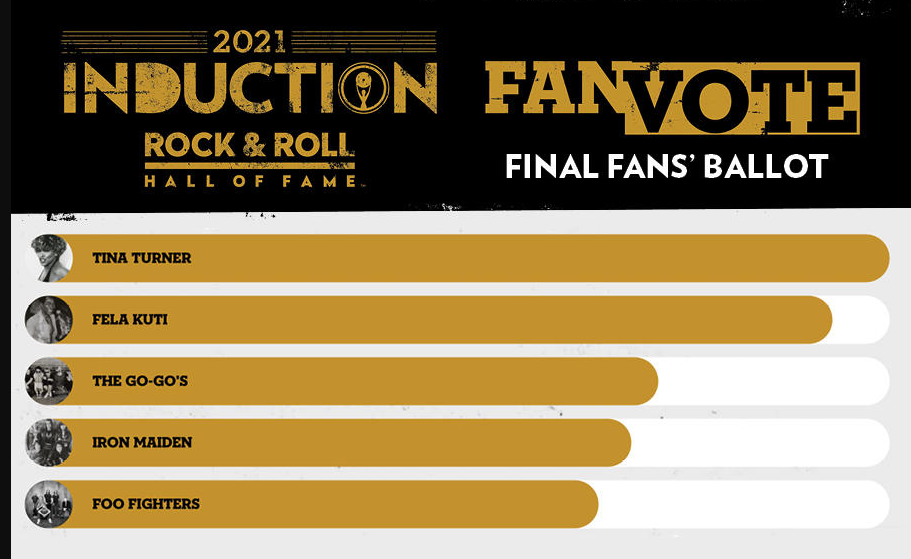 Ballots were sent to an international voting body of more than 1,200 artists, including current living Inductees, historians, and members of the music industry.

Some of the factors considered were an artist’s musical influence on other artists, length and depth of career and the body of work, innovation, and superiority in style and technique.

Last year, only one of the five Fan Vote acts actually got inducted (the Doobie Brothers), even though Dave Matthews tallied the most.

Up until then, every single Fan Vote champion had been inducted the same year they won.

Carole King, Todd Rundgren, Devo, Dionne Warwick, Chaka Khan, Kate Bush, Mary J. Blige, Rage Against the Machine and Jay-Z were also among the artists fans got a chance to vote for.

But many Nigerians have taken to social media to express their displeasure with the organisers for not finding Fela Kuti worthy of induction into the Rock and Roll Hall of Fame for 2021 despite his exploits as Afrobeat legend.

Wale Adetona wrote: “This is bullshit! With all the massive campaigns and votes for Fela, you still don’t count him worthy to make the list? You must think Nigerians are a joke to you! Don’t come to the Mainland!”

@TheRaroLae tweeted: “Fela Kuti was 2nd place based on fan votes. However, the ppl who didn’t come close to him were selected to be inducted into the Rock & Roll Hall of Fame.

“Despite this there was a clause that essentially meant the fan vote didn’t matter. They never planned on letting Fela win.”

Femi Fola queried “What was the point of including a fans ballot if you’re just going completely ignore it?????????? Fela’s votes mean nothing?”

@ObongRoviel tweeted “All the efforts we put together to Vote for Fela they still didn’t induct him?”

Tunde Ednut said, “After many of us voted, they didn’t include Fela as one of the Legends.”

@UNCLE_AJALA stated “So Fela Anikulapo-Kuti didn’t make the list of #RockHall2021 inductees, with all our campaigns and votes?. I think fans vote is just formality, because Fela was the first runner up behind Tina Turner, and those in 3rd, 4th and 5th place made the list.”

Nifemi Ola-phillips argued: “Don’t just include Fela’s name next time. Fela wouldn’t even want us to be using his name to give white man award clout. Make all of you getat”