Nigerians Will Praise Buhari At End Of His Tenure, Presidency Claims ▷ Nigeria news Nigerians Will Praise Buhari At End Of His Tenure, Presidency Claims ▷ Nigeria news

– According to Femi Adesina, Buhari has worked very well for the country

– Adesina is a presidential spokesman said Buhari has delivered from infrastructure, to finance, education, healthcare, sports among others

The Presidency has declared that Nigerians will eventually realise that President Muhammadu Buhari’s administration has really impacted the country.

In fact, the presidency, through Femi Adesina, in a statement posted on Facebook titled ‘The Buhari Administration at 6: Counting the Blessings One by One’, said even critics of the president will praise him after his tenure.

The statement catalogued the achievements of the incumbent federal government led by President Buhari in the last six years.

Adesina said the administration had recorded giant strides in various sectors of the economy that would be recognised by “those who are dispassionate and fair-minded, not beclouded by political partisanship and undue cynicism.” 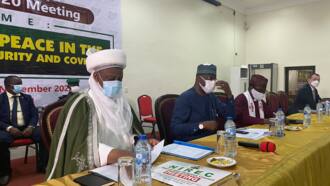 Sultan of Sokoto to politicians: Let us not deceive ourselves, things are not alright

“This milestone affords the opportunity to reflect, and recount the impact that has been made (and is being made) on different sectors of national life.

“From infrastructure, to finance, education, healthcare, sports, anti-corruption, human development, housing, oil and gas, foreign relations, and many others, the administration is recording giant strides, enough to make Nigerians proud.

“That is, those who are dispassionate and fair-minded, not beclouded by political partisanship and undue cynicism.

“Some people claim: ‘We don’t see what they are doing. We don’t hear about it.’

“When the Administration breasts the tape in another two years, by the grace of God, the applause will be resounding, even from the worst of sceptics.

“Facts are undeniable, and always remain so. They are stubborn things.”