Home / Blog / Entertainment / Officer Goes Berserk in Maiduguri, Guns Down 6 Colleagues Over Misunderstanding With His Wife

Officer Goes Berserk in Maiduguri, Guns Down 6 Colleagues Over Misunderstanding With His Wife Officer Goes Berserk in Maiduguri, Guns Down 6 Colleagues Over Misunderstanding With His Wife

Daily Trust reports that the incident happened inside the police college quarters of Borno Police headquarters in Maiduguri, on Friday, March 4.

A senior police officer told our correspondent that the errant officer is currently being detained at the State Criminal Investigation Department (SCID). 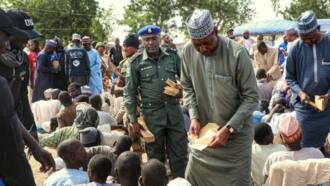 A family source said the police sergeant had a misunderstanding with his wife and neighbours tried to intervene but he didn’t listen.

“He started shooting and threatened to kill everyone. Unfortunately, he shot people, but six mobile policemen died and two others are currently receiving treatment at Specialist Hospital.

“He razed down two blocks of eight rooms in the process and also shot his father-in-law.”

The police command in the state is yet to confirm the development, The New Telegraph also reported.

Governor Zulum of Borno state and his predecessor, Senator Shettima, who represents Borno Central were in the town to meet with the natives who are now quartered in several camps, VON added.

The two prominent politicians, who travelled by road made various stops and shared food, clothing and cash to over 55,000 stranded persons from Gamboru and Ngala towns. 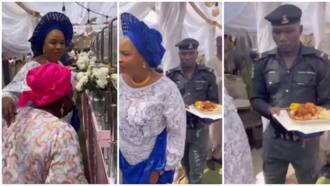 We’ve identified him, Police react to video of officer carrying food for VIP at event, reveals next action

They spent three days with the people, with many of the natives returning to their native homes and reuniting with their families and loved ones.

The governor and his predecessor also took time off to listen to the jeremiads of the natives who are sheltered in camps and those who have been resettled in their respective communities.

In another development by Legit.ng, an internally displaced persons’ camp located along Muna general district in Jare local government area of Borno state was gutted by fire.

It is not yet clear when the fire started or the level of damage done by the inferno.

However, officials of the National Emergency Management Agency (NEMA) were alerted to help bring the situation under control although details about the incident are still sketchy.