– Both agreed that in spite of his ingenuity on the pitch, the Frenchman mostly cheats his way through on board and card games

Chelsea striker Olivier Giroud has joined Paul Pogba to brand N’golo Kante as a cheat despite the midfielder’s simple life.

Kai Havertz scored the only goal that ensured the Blues rule Europe for the second time in their history after beating Manchester City 1-0 in the final of the competition. However, in spite of the Frenchman’s simplicity and the fans’ love for him, there are definitely some things hidden about the player.

And this is what teammate at the club and national team levels Giroud has uncovered while preparing for the 2020 Euro championship. Giroud was quoted by Chelsea FC news and London.Football.

“I don’t want to go into details, but he also has his flaws. When we play cards and stuff like that, he is such a winner that he cheats a bit with the rules and I am not the only one saying this.”

Red Devils’ most expensive player Pogba claims that Kante cheats his way through during card and board games in spite of his brilliance on the pitch. He also said:

“He cheats a lot. A lot. At card games, board games. Honestly, I’m telling the truth. He cheats. He says he doesn’t cheat, but he does. He uses cunning. He’s a smart kid, N’Golo. But it’s okay. You have to love him.” 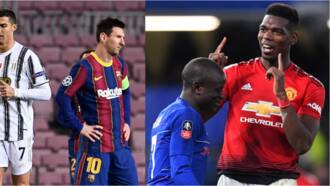 And while cheating in card games is not exactly an unforgivable sin, Kante has countered the nice guy image himself in recent days.

Legit.ng earlier reported that N’Golo Kante was seen handing a fan his Champions League medal in appreciation for a gift that was presented to him, Republic World reports.

Footage shows the moment when Kante received a smock from the fan and he immediately allowed the supporter wear his Champions League medal while being photographed.

Kante shared his precious prize after receiving the gift from the fan as he, in turn, showed appreciation in an amazing way.