The campaign organisation of Asiwaju Bola Ahmed Tinubu has reacted to the current sorry state of the Peoples Democratic Party which might affect the chances of its presidential candidate, Atiku Abubakar, in 2023.

In a statement released on Friday, September 23, the director of media and publicity of Tinubu’s campaign council, Bayo Onanuga, described Atiku as a “divider-in-chief”, The Cable reports.

Onanuga stated that it is very obvious to Nigerians now that the PDP is in disarray, and that the presidential ambition of Atiku has hit the rocks even before the commencement of campaigns for the coming general elections. 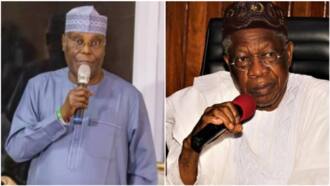 He stated that the former vice president got it wrong from the onset and created disunity in the PDP by insisting that only the north can win the presidential election when a good number of his colleagues have already resolved that it is time for the south to get the presidential slot.

Part of the statement seen by Vanguard read:

“Instead of being a unifier, Atiku is now a divider-in-chief. His campaign on this score is heading for a stillbirth, just as some of his programmes have been found to be nothing new, as they are already being implemented by the All Progressives Congress (APC) administration of President Muhammadu Buhari.

“The former Vice President created the crisis for himself, by pushing the fallacy that only a northern candidate can win the presidency for his party, despite the open record that southerners, when they network with their northern compatriots, can also win the election.

“Former leaders, Chief Olusegun Obasanjo and Dr. Goodluck Jonathan demonstrated this in 1999, 2003, and 2011. As a campaign, we can only pity former Vice President Atiku for the self-inflicted injury he invited unto himself. Chinua Achebe, the very accomplished novelist in one of his classics, Arrow of God, wrote that a man who brought ant-infested faggots into the homestead should not grumble when lizards begin to pay him a visit.”