South Africans recently joined hands on social media to help the couple who recently welcomed an amazing ten bundle of joys into their family all in one day at a Pretoria hospital earlier this week.

All-day long today, #NationalBabyShower has been trending as various kind South Africans pledged to buy baby goodies and other stuff for the seven boys and three girls who all came into the world recently. 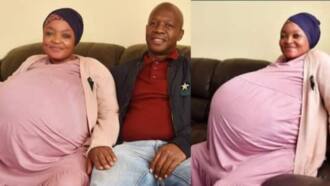 Husband of woman who delivered 10 babies finally speaks, reveals he cried when he heard the good news

Mzansi stands together to welcome the miracle

Using the now viral hashtag, many South Africans have promised to buy nappies, milk and all the other things little babies and their parents need to have a comfy stay on the outside of the womb.

“National Baby Shower is being organised for the 10 babies from that Tembisa couple (Mmarena le Mokgalabje). I hope Baby City doesn’t hijack the concept & shut everybody out like KFC did with that national wedding.#NationalBabyShower”

“#NationalBabyShower when are we presenting gifts?We are here for the baby shower cake”

Meanwhile, Legit.ng earlier reported that Tsotetsi Sithole, the husband of Gosiame Thamara Sithole said that he had cried when learned that his wife had given birth to ten babies. He also said that South Africa would be able to see the babies when the time is right and right now the babies are very sensitive.

Due to the rare birth of ten babies at once the babies were born premature and quite small. The human body is normally meant to carry one baby according to IOL.