Ibadan, Oyo – The world’s largest flag which is Nigeria’s national flag has been unveiled in Ibadan, the largest city in the sub-Saharan Africa, on Thursday June 24.

Legit.ng‘s regional reporter in Ibadan, Ridwan Kolawole, who is at the launch of the flag, reports that the flag is scheduled to be hoisted later in the year. 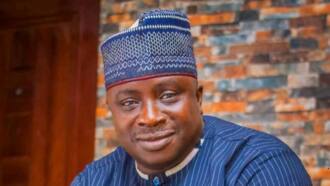 Speaking at the unveiling of the gigantic flag, Pa Akinkunmi, who is the designer of the Nigeria’s national flag, said he was pleased to see the country’s flag flying.

The Octogenarian also enjoined Nigerians to uphold the flag which the country’s symbol of unity.

“I designed the Nigeria’s flag before I was 23 as an undergraduate studying electrical engineering at Norwood Technical College in London. I have always dreamt about Nigeria being at the front of every good thing.”

He also gave special recognition to General Lucky Irabor for surprising and honouring him.

I was not born when Nigerian flag was designed 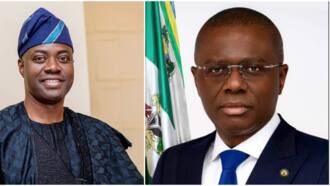 In his remark, General Irabor thanked Pa Akinkunmi for his sense of patriotism, adding that he was not born when the flag was designed.

“When you designed this flag, I was not yet born. but today I am part of history-making. All my life since my teenage years, I have always fought the flag. So, Today meeting Pa Akinkunmi, the designer of Nigeria’s flag is an honour and it is delightful for me.”

He also urged Nigerians to unite and shun any divisive tendencies, saying that people should work together for unity and love.

“Let us always remember that the flag is not a mere symbol of Nigeria; it is a symbol of a United Nigeria. Let us work together for unity and love.”

Speaking on the initiative to have the world‘s largest flag, the organiser, Babajide Ogunsanwo noted that prior to the unveiling, the Guinness World record for the largest flag to be flown was held by the United Arab Emirate, which he said it covered an area of 2,448.6 square meters. 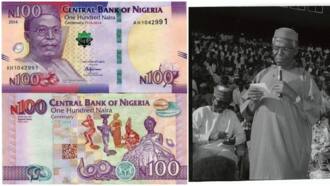 He, however, noted that the current Green-White-Green Flag covers 3,275.6 square meters.

“The process to certify this achievement has begun and should be concluded before the flag is hoisted in Ibadan later this year.”

Nigerian flag was created in 1959

Meanwhile, Legit.ng had previously reported that Nigerian flag was created in 1959 and first used on an official basis in 1960.

It was reported that the green in the Nigerian flag represents the rich natural resources of the country while the white is a symbol of peace and prosperity.

The flag of Nigeria was officially raised on October 1, 1960, when the Independence Day of our great country was celebrated.