– The vice president of Liberia, Dr Jewel Howard-Taylor, is in Nigeria for the 1st Ordinary Session of the ECOWAS parliament

– On the sidelines of the session, Dr Howard-Taylor was on Friday, May 28, hosted by her Nigerian counterpart, Professor Osinbajo

– During the meeting, the two leaders deliberated on the need for the two countries to continue to cooperate with each other at both bilateral and multilateral levels

This was disclosed in a thread of tweets posted by the presidency via its official Twitter handle, @NGRPresident.

Legit.ng gathers that the Liberian vice president led a delegation to attend the 1st Ordinary Session of the ECOWAS parliament held in Abuja on Thursday, May 27, and spoke at the opening ceremony. 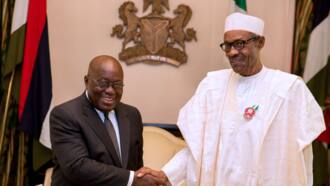 She took the opportunity to pay a courtesy visit to the vice president in his office on Friday afternoon.

The two leaders reportedly exchanged pleasantries and reaffirmed both countries’ shared aspirations and continued desire for more effective cooperation at both bilateral and multilateral levels.

Legit.ng notes that Nigeria and Liberia enjoy a very good and warm diplomatic relationship dating back to even before independence.

Meanwhile, the presidency has reacted to a media report insinuating Vice President Osinbajo was sick as he was sighted at the Reddington Hospital, Lagos on Saturday, May 22.

A report by Sahara Reporters had claimed that Osinbajo’s presence at the hospital created “unexplained tension” and “raised questions as to the reason the number two citizen was there.”

However, Laolu Akande, the senior special assistant on media and publicity, debunked the report in a tweet seen by Legit.ng on Monday, May 24.

In another report, Vice President Osinbajo has addressed speculations that he declared interest in the 2023 presidential race.

The vice president said the rumour was not true in a statement sent to Legit.ng by Akande, his spokesman on Monday, May 17.

He also dissociated himself from a website: supportosinbajo.ng calling on Nigerians to join a volunteer group mobilising support ahead of the 2023 presidential election.