– PSG are through to the quarterfinals of the UEFA Champions League

Paris Saint Germain advanced to the quarter-finals of the Champions League at the expense of a determined Barcelona after holding the Catalan giants to a 1-1- draw at the Parc des Princes.

Lionel Messi scored a superb long-range effort and saw his penalty saved as Barcelona tried to mount an unlikely comeback from a 4-1 defeat in the first leg.

Despite coming into the game needing to overturn a three-goal deficit, it was Barcelona who went behind first courtesy of a Kylian Mbappe penalty. 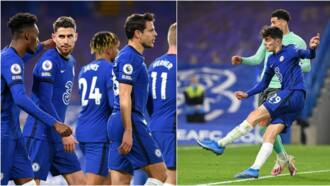 The hosts were handed the spot-kick after Clement Lenglet was adjudged to have fouled Mauro Icardi in the box, with Mbappe making no mistake from a few yards out. Messi’s superb long-range effort was not enough to mount a comeback against PSG.Photo by FRANCK FIFE / AFP
Source: Getty Images

The first goal seemed to give PSG some much-needed breathing space in the game, as it came after a series of unrelenting attacks from Barcelona.

Keeper Keylor Navas was in inspired form on the day as he was forced into some excellent saves to deny the likes of Ousmane Dembele when the scores were 0-0.

Dembele was denied by the keeper once again in the 35th minute after a fairly tame shot but the scores on the day were level courtesy of Messi’s superb long-range effort with his potent left foot.

With the aggregate score of 5-2, Messi missed a chance to cut the deficit from the penalty spot as Navas saved his spot-kick after Antoinne Griezzman was fouled in the penalty area. 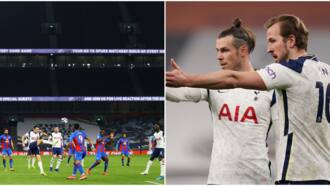 That penalty save seemed to sum up Barcelona’s fortunes in the tie as PSG continued to resolutely keep out their opponents, who possessed in their half for most parts of the second period.

In the end, it finished 1-1, with Messi joining his long-standing rival Cristiano Ronaldo in exiting the Champions League in the last 16.

For PSG, it will be the perfect revenge to the Catalan giants, nearly four years to the day when they were dramatically knocked out 6-5 on aggregate.

Legit.ng earlier reported that Nigerian football star Asisat Oshoala was on target for Barcelona ladies in their 5-0 win over Fortuna Hjorring in the Women’s Champions League Round of 16 contest.

The Super Falcons striker who started the game from the bench came on for Patricia Guijarro in the 53rd minute before finally ending her six games goal drought.

She found the back of the net in the 78th minute after making a run into the opposition’s danger box before placing the ball beyond the goalkeeper’s reach.