– Nigeria is currently in a state of mourning over the death of the Chief of Army Staff (COAS), Lt Gen Ibrahim Attahiru

A source who does not want to be named told Daily Trust that the Nigerian president is considering a senior officer from the southeast to correct the alleged imbalance in the composition of his security team.

But the source noted that agitation and attacks on security agents and formations in the southeast may hinder the chances of the COAS emerging from the zone. 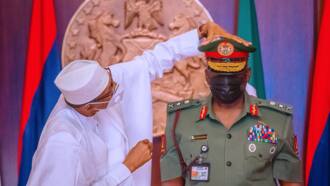 However, a senior officer at Defence Headquarters told the newspaper that nation is still mourning late Attahiru.

He said it was too early to be talking about COAS replacement at this time.

Meanwhile, President Buhari has declared Monday, May 24, a work-free day for members of the Nigerian Armed Forces in honour of Lt. Gen. Attahiru, and 10 others who died in an air crash on Friday, May 21.

The Secretary to the Government of the Federation (SGF), Boss Mustapha, said this in a statement on Sunday, May 23, Daily Trust reported.

Legit.ng gathers that the Nigerian leader also ordered the national flag to be flown at half-mast in all public buildings, facilities, and official residences from Monday, May 24 to Wednesday, May 26th. 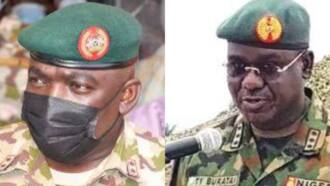 Late Attahiru was on the verge of making Nigeria proud, Buratai reveals

In another news, the former COAS Lt Gen Rtd, Tukur Buratai has said Nigeria would have eventually become a better place if the late Chief of Army, Lieutenant General Ibrahim Attahiru, had lived long to fulfill his plans for the country.

According to Buratai, the late Attahiru was on the verge of making Nigeria proud before his death, Channels TV reported.

He stated that the late COAS was determined to succeed in the various military operations across the country, Guardian added.