– Some are out due to knee injuries, while others have groin and some failed to recover well in time for the competition

Injuries are inevitable in football and that is probably one of the reasons footballers guide themselves from the danger.

However, there is no amount of protection a player wears that can stop him from picking up one regardless of its nature.

And for every tournament, there are casualties who in spite of their superb displays, will watch a whole tournament from the stands.

With Euro 2020 starting this weekend, there are a number of top-class players who will not be available for their countries as they campaign for the continental silverware.

In view of the above, SunSport names 11 players who will miss out on this summer’s championship owing to different types of setbacks.

Below are the known names who will not participate in the Euro 2020 starting Barcelona goalkeeper Ter Stegen to Sweden legend Zlatan Ibrahimovic. 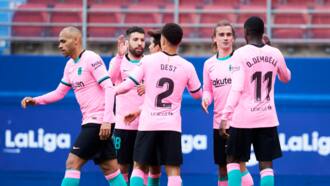 Panic as Barcelona put Griezmann, Dembele, 16 other top stars for sale this summer

Meanwhile, Turkey and Italy will get the games underway on Friday at the Stadio Olimpico while three games – Wales vs Switzerland, Denmark vs Finland, and Belgium vs Russia will be played on Saturday, June 12.

Legit.ng earlier reported that Portugal captain Cristiano Ronaldo has been trolled for taking the ‘worst ever free-kick of his career during their friendly match against Israel ahead of Euro 2020 championships.

The Juventus striker is famous for scoring free-kicks as it remains one of the trademarks of his career, but that seems to have changed.

The 36-year-old who seemed to be in the twilight of his career made an effort to take one during their 4-0 win on Wednesday night, June 9.