Samuel Ortom, the governor of Benue, has issued a stern warning to herdsmen to respect the state’s relevant laws or go to Bauchi state if they are bent on carrying weapons such as AK-47 around.

Legit.ng notes that the Benue governor said this in response to a previous statement by the governor of Bauchi state, Bala Mohammed, wherein he justified the use of weapons by herders.

Speaking in a video posted by Channels TV on Twitter, Ortom directly took a swipe at the Bauchi state governor, noting that he was castigated by Nigerians for saying that Fulani herdsmen can carry AK-41 and can live anywhere. 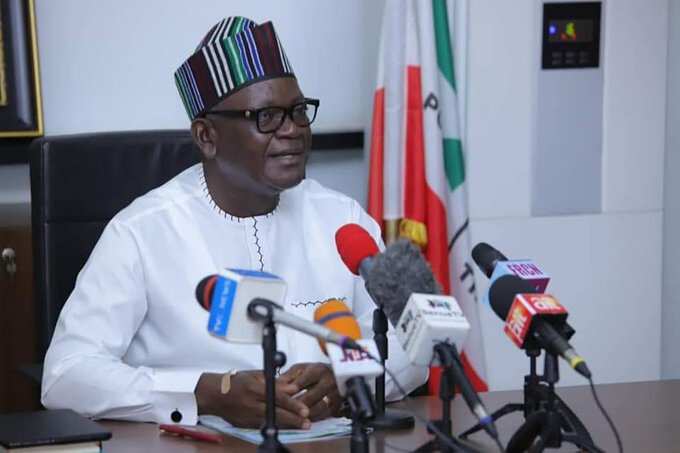 Governor Ortom says any herdsmen will to stay in Benue should be ready to respect and abide by the state’s laws.
Photo credit: @benuestategovt
Source: Twitter

He said Nigeria is not governed anyhow but by the constitution which gives power to governors in all the states to preside over the land of their states on behalf of the people.

Ortom added that its the governors who can allocate land and permit people to stay where they are.

The Benue governor said bandits cannot come to his state and stay in the forest under any guise, saying that they should go to Bauchi state.

“Benue state is governed by the constitution of the federal republic of Nigeria. Benue state also has its laws. Once you are a Fulani man, you come with legitimate papers, you are free to stay in Benue state and do business according to the laws of our land.

“Anyone who is not willing to respect the laws of our land should go and meet Bala Mohammed. There you can carry AK-47 and you will not be apprehended. We will apprehend you if you come here.”

Meanwhile, Governor Mohammed of Bauchi state had on Friday, February 19 defended his comment about armed herders.

According to the governor, his comment supporting herdsmen arming themselves with AK-47 rifles was a figure of speech endorsing their protection.

The comment of the governor had sparked outrage across Nigeria, with many accusing him of supporting criminality.